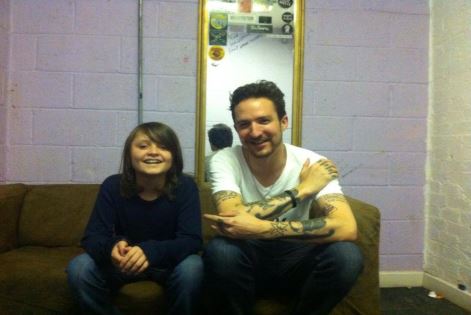 Find out what was said when our very own Ned Dylan talked to Frank Turner just before his intimate gig in Northampton.

NED DYLAN MEETS FRANK TURNER: IS FRANK TURNER THE BEST LIVE ACT IN THE WORLD?
Acoustic Punk Troubadour Frank Turner crowd surfs as he sings Four Simple Words to an 800-strong sold-out sweaty crowd with infectious passion. He jumped back onto the stage for one more chorus 10 years on from his first ever solo show at the 93 Feet East. As he exited all you could hear down the front was cheering and people saying that was the best thing they’d seen in Northampton for a very long time.
I was lucky enough to interview Frank earlier that day. I sat down in a small intimate room reminiscent of Turner’s backroom beginnings as he wrote tonight’s 24-song setlist – there was even one song that was so new he hadn’t named it yet. We started off by talking about his new side-project metal band Mongol Horde and how he felt about playing with Ben Dawson again, who was not only the Million Dead drummer but also in Turner’s first ever band Kneejerk. - “I don’t get to see very much of Ben anymore, because I tour all the time, I miss hanging out with him and I miss playing with him. We started playing together when we were about 12.” He tells me fondly. “The music that I mainly want to make is the music that I’ll play tonight, but there’s a little part of me that wants to scratch that itch – that screaming, fury, heavy, aggressive itch. There’s something physically satisfying about playing heavy music – when you come off stage and you’re just drenched in sweat. That’s a good feeling.”
10 years on (to the day) from when Turner first played a solo show, his songwriting is still on top form. People at the gig were dancing to the new ones like they were old tunes. Talking about his personal songwriting and I asked Frank if he believes you can learn the secret of how to write a good song. - “Yes to a degree” he said, “There is definitely a craft to songwriting as well as an art. I think that there are certain things you can learn. I’ve done a couple of songwriting workshops in my time and I spend most of my life thinking about songwriting, which is different to playing guitar or a show. There is an element to it, which is just inspiration and spark.”
I went on to ask him what his thoughts were on giving music away for free, in the wake of U2/Apple’s album giveaway. - “The business model of the music industry is changing. I don’t care very much about business models. I care about music. At the same time, what’s been sad in the last ten years is that a lot of people who worked really hard and were really dedicated to underground music lost their jobs and didn’t get any thanks because kids stopped paying for albums. Recorded music essentially is free – if there’s a record that you want to get you can find it…It doesn’t mean recorded music needs to be paid for, but if recorded music is going to free other things need to change. I just think the people who work hard should get paid. The thing that made me angry was a lot of people got on their high horse about fighting a blow to the system by stealing music. You’re not hurting Simon Cowell. You’re hurting the guy who works at the indie record store. You’re hurting the guy who’s in a small underground band. They’re the people losing their livelihoods. I feel like that the transitional period is done now. I think people understand how it is now. The U2 thing is slightly different – I’m not sure I would have said no if Apple had made the same offer to me in all honesty. It’s hard to turn down we could of course have a very long conversation about U2.”

I always ask my interviewees to pick their favourite festival record. Without hesitation Frank picked One Way by The Levellers and even told me that Beautiful Days is one of his favourite festivals – I was there last time he played too!
https://www.youtube.com/watch?v=0mVvMopn2os
“I’m going to chose One Way because Beautiful Days is one of my favourite festivals and plus there’s some footage of them playing it at Glastonbury in 1992 in front of 200,000 people – I got goosebumps watching that.”
Frank Turner’s passion is felt from the front to the back of the room. Whether he’s singing a ballad or a folk-punk anthem. Turner is a class musician with untouchable showmanship. This all brings me back to my question – is Frank Turner the best live act in the world right now? I think he may well be.

Published on 21 September 2014 by Wayne Feltham