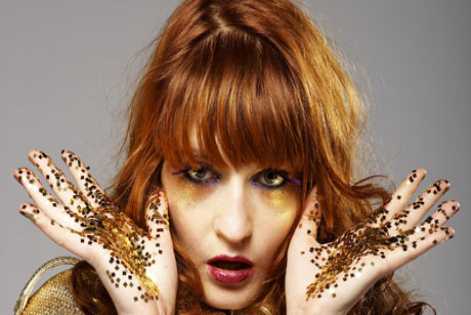 To celebrate the fact that Florence + the Machine will be headlining on Friday night, they have put together a spectacular video message for us rejoicing in our Wildlife theme

For 2012 we‘ve got what is undoubtedly the finest line-up in Bestival’s nine-year history, including sets from the legendary Stevie Wonder, New Order, The xx, Sigur Rós, Friendly Fires, Orbital, Frank Ocean, Hot Chip, Annie Mac Presents, Skream & Benga, Four Tet going back to back with Caribou and so much more. And that’s not to mention the magic and mayhem of the Wishing Tree, the Swamp Shack, Tomorrow’s World, the Wall of Death the Roller Disco and Ambient Forest or even our brand new Grand Palace of Entertainment and, of course, bounteous bohemian treats for you to enjoy. Now, we are truly delighted to be able to announce our fabulous Friday night headliner, plus another one of our long-time favourite bands who will both be joining us at Robin Hill this September…
Rob da Bank says: “The first time I met Flo she was whirling around like a spinning top to a Paul Simon track at a party I was DJing at. I hadn't even heard her open her mouth but she had this alluring vibe already. Once I heard her scratchy demo I was sold and when she did her first radio session for me at Radio 1 I couldn’t believe this flame-haired eccentric young lady had such a stunning voice. Her shows for us at Bestival and Camp Bestival over the last few years have always been highlights for many and I’m glad we can finally seal the deal with a headline show on the Friday of Bestival and with The xx on before her this promises to go down in the Best of Bestival yearbook!”
Making a triumphant return to Bestival, we are mega-pleased that Florence + The Machine will be headlining the main stage on Friday night. A longstanding Bestival buddy, Florence Welch and her trusty Machine have wowed Bestivalites across the years. From her mesmerising performance in the Club Dada tent to a handful of those in the know, to her all-conquering main stage set in 2009, her epic vocals, quirky melodies and self-contained musical world have created some utterly jaw-dropping moments that will live long in Bestival lore. Her second album ‘Ceremonials’, released at the end of last year, has cemented her reputation as one of the biggest stars on the planet and gained her accolades by the bucket-load, so we really are honoured to have her back with us again!
Florence Welch says: “This year we are headlining the one and only Bestival on the main stage on the Friday night after the amazing The xx, we hope we'll find you there in the wilderness with us! Lots of love, Florence + The Machine.”
To celebrate the fact that Florence + the Machine will be headlining on Friday night, they have put together a spectacular video message for us rejoicing in our Wildlife theme, which you can check out on our website, www.bestival.net!
Never ones to do things by halves, we’re also over the moon to announce that Swedish indie-pop doyens Miike Snow will be getting on the ferry across the Solent to join us at Bestival. Lauded for their eponymous debut album that brought them to worldwide attention, the band’s recent sophomore outing, ‘Happy To You’, has upped the infectious factor, as they effortlessly cross genres with their uniquely orchatronic sound. Their live show is a theatrical joy and one not to be missed and we can’t wait to see them!
The band told us: “We of Miike Snow are very happy to be playing Bestival this year, on the fantastical Isle Of Wight. We are looking forward to making sure everyone has a delightful time, and visiting Shanklin Chine. See you all very soon.”