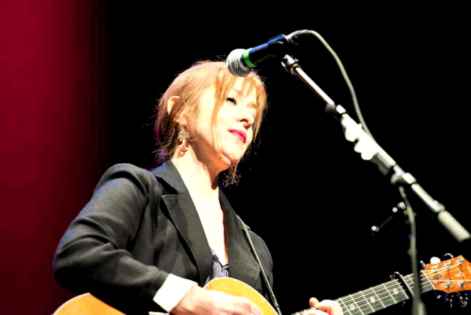 One of America’s finest female singer songwriters will spearhead a vibrant line up of global musicians descending on the Devon gem of Dartington Hall next month for the second HOME festival.

The inimitable Suzanne Vega, known for her eclectic folk-inspired songs and hypnotic voice will headline the Saturday programme of the extended two-day acoustic music event – at one of the most beautiful festival sites in the country. With its magnificent gardens, medieval hall and courtyard, rolling farmland and ancient deer park, Dartington Hall has been described as “a bit of English magic.”
Widely regarded as one of the most brilliant songwriters of her generation Suzanne had two Top 10 hits, with the
a capella Tom’s Diner and the poignant Luka.


A leading figure of the folk music revival of the early 1980s the distinctive vocalist has recently made her off-Broadway theatre debut in her self-penned one woman show about American novelist Carson McCullers to great acclaim.
Following a sell-out inaugural year in 2010, as a one day event, HOME Festival returns this year with a bigger programme starting with a curtain raiser on the evening of Friday 24 and running from midday to 1am on the Saturday.
There will be three stages including the exquisite performance space of Dartington’s Great Hall (left) - which forms part of the original 1388-built manor house.
Taking place on the same weekend as another West Country festival – the famous Glastonbury – only underlines the different vibe and intimacy offered by HOME, say the organisers. Artistic Advisor “Drum” says: “It’s the perfect antidote to Glastonbury”. His fellow artistic advisor Thomas Brooman, former Artistic Director of the renowned WOMAD organisation says: “In some ways it is harder organising HOME than WOMAD. With a large festival it doesn’t matter so much when something doesn’t quite hit the spot. But with just three stages you’ve got to be convinced that every single artist is right”.


The exceptional line-up of musicians will bring sounds as diverse as sitar, kora, Swedish nyckleharpa and West African riti (one-stringed fiddle) to the festival, weaving a multi textured tapestry of music, voice, language and roots to the South Devon site.

As well as outstanding international artists the festival will also feature food, films, workshops and family events. There will be a traditional fair and children’s activities from face painting and banner making to a treasure hunt.