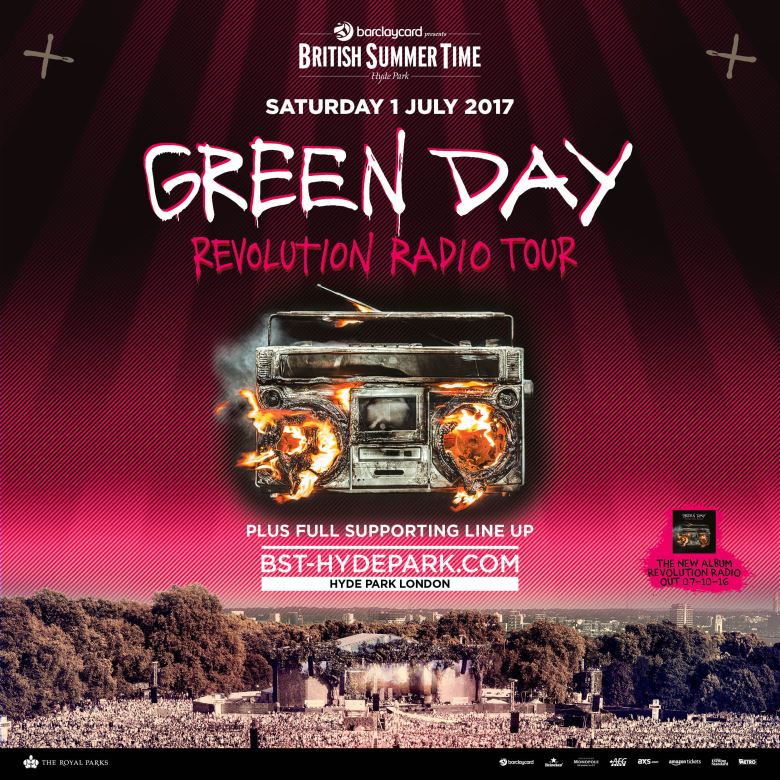 Barclaycard presents British Summer Time Hyde Park will be celebrating its fifth birthday in 2017 and to mark the occasion, we will be continuing what we do best…..

hosting the biggest, best and most legendary music in London’s historic Hyde Park.

The thought of facing a long winter is made a little easier by dreaming of summer 2017 and announcing our first headliner, the incredible Green Day! One of the world’s most revered rock bands, the Grammy Award-winning trio release their brand new album ‘Revolution Radio ‘ on October 7th and celebrate by revealing this huge show.

Now approaching its fifth year, Barclaycard presents British Summer Time Hyde Park has been host to some of the biggest and best live acts since its debut in 2013. From The Rolling Stones to Carole King, The Libertines to The Who, Kylie to Stevie Wonder, Black Sabbath to Taylor Swift, music history has been written almost night by night.

“London in the summer, us and tens of thousands of fans having the biggest party in one of the world's most legendary venues," says Green Day's Billie Joe Armstrong, "We have the best year to look forward to and this has just made it extra special.”

Since breaking through in 1994 with the Dookie album, Green Day – formed by Billie Joe Armstrong (lead singer), Mike Dirnt (bassist) and Tré Cool (drummer) – have become one of the world’s biggest bands with over 75 million worldwide sales. After a succession of hit albums, their 2004 rock opera American Idiot reignited the band's popularity with a younger generation.

Green Day have won five Grammy Awards: Best Alternative Album for Dookie, Best Rock Album for American Idiot, Record of the Year for Boulevard of Broken Dreams, Best Rock Album for the second time for 21st Century Breakdown and Best Musical Show Album for American Idiot: The Original Broadway Cast Recording. They were inducted into the Rock and Roll Hall of Fame in 2015 in what was their first year of eligibility for induction.

Tickets for Green Day’s headline show are on sale now.

Rock giants Green Day are a fitting addition to the Barclaycard presents British Summer Time Hyde Park hall of fame, which hits its fifth year in 2017 and cements its status as one of London’s defining summer events.

‘Festival of the Year’ at the UK Event Awards 2013

‘Best Use of New Technology’ at the Festival Awards 2013

James King, Senior Vice President, AEG Live comments: We're super excited to be announcing Green Day as our first headliner for 2017. So many hits and also some amazing new music as well.  London is going to be treated to one of the best stadium bands of our generation on the Great Oak Stage in Hyde Park.”

Daniel Mathieson, Head of Experiential Marketing and Partnerships for Barclaycard, said: “We’re so excited that Grammy Award-winning rock band, Green Day, is the first headline act to be announced at Barclaycard presents British Summer Time Hyde Park 2017 – in what will be the festival’s fifth year.  Barclaycard customers can get ahead of the rush with exclusive pre-sale ticket access from 9am on Tuesday 4th.”

Penelope Boyd, Head of Events at The Royal Parks, said: ‘We are very excited to welcome Green Day to Hyde Park for Barclaycard presents British Summer Time Hyde Park. By attending BST, fans not only get to see the best artists from around the globe but by enjoying themselves are providing vital funds which go back into maintaining this amazing park.”

Published on 20 December 2016 by Ben Robinson