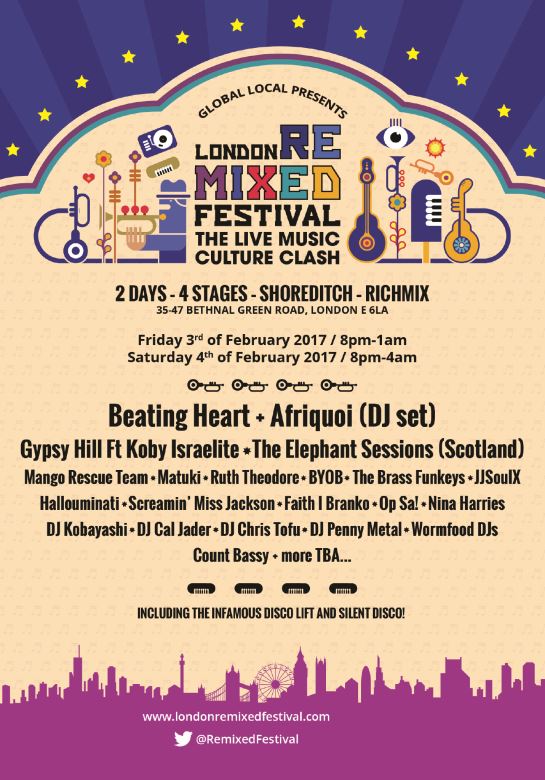 London Remixed Festival is back on Friday 3rd and Saturday 4th February 2017 at Shoreditch's Rich Mix, featuring headline DJ sets from the creators of Beating Heart;

Continental Drifts and Global Local; the producers of the most rocking festival stages across the globe, are excited to be back, joining forces once again with their long standing musical partners Movimentos, Wormfood, Two For Joy, Woodburner, Polka Club and some new collaborations, including, Vibes and Pressure and Arts Canteen, for the return of LONDON REMIXED FESTIVAL 2017.

London is a powerhouse of musical innovation and the London Remixed Festival brings you the finest selection for 2017. Showcasing the best in Latin Grooves, Afrobeats, Tropical Bass, VintageRemix, Balkan Beats and Acoustic Soundclash, we are kicking Global London into the future! The festival is a celebration of the best emerging musical talent, but without the mud, rain or hassle of camping; expect performances from over 25 cutting edge band and DJs across 4 stages and 2 days all in one vibrant venue nested in the heart of Shoreditch.

This year’s headliners include a DJ set from the creators of Beating Heart; an ongoing charity organisation set up by Hugh Tracy, who made 35,000 field recordings across Sub-Saharan Africa between the 1920’s and 1970’s; his intention was to reveal the beauty and complexity of this music to a world that saw little value in it. Beating Heart has connected the International Library of African Music (ILAM) archive with contemporary producers including Rudimental & My Nu Leng, making fresh sounds for a modern audience. Building from Tracey’s vision, the income generated from the project will be used to assist people in the areas where the music originally came from. Project cofounders and DJs Olly Wood and Chris Pedley will be spinning the originals alongside the fresh remixes plus a load of other funky tunes.

Last but not least, Scottish band The Elephant Sessions who are renowned for breathtaking live shows, including monstrous bass and pounding drums will be performing at the Folk Ghetto.

Published on 20 November 2016 by Ben Robinson