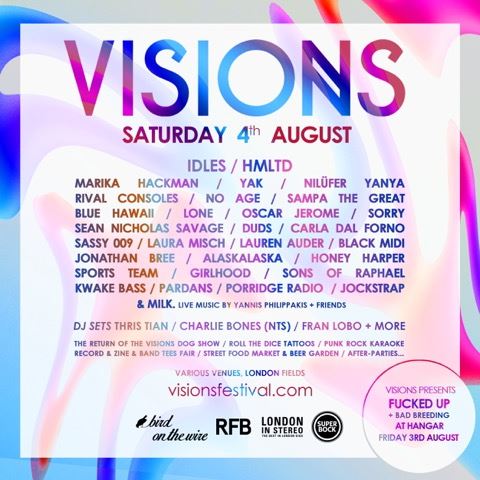 We are excited to welcome from London – the six-piece art-pop band ALASKALASKA and electronic act Jockstrap. Completing the bill is Norwegian trio Sassy 009 and Brighton band Porridge Radio.

FUCKED UP will play a special Visions Presents Friday event on Friday 3rd August and we are excited to announce that Stevenage punk band Bad Breeding will be joining them. The event will take place at London Fields’ Hangar venue.

In addition, the festival is excited to share details of the Visions Dog Show, in association with All Dogs Matter and The Line Of Best Fit. This year’s theme for 2018, following last year’s Twin Peaks theme, will be “World Leaders Past and Present”. Judges are yet to be announced but previous years have seen members of Mystery Jets, Girl Ray & Shura take part. The much loved yearly event will feature a number of different rounds and entrance for your dog to win is now open (participants will need to email - dogshow@visionsfestival.com for details on how to enter). All entries are £5 and proceeds go to the All Dogs Matter Charity. Categories are Best Fancy Dress [World Leaders Past & Present], Best Dog, Cutest Pup, Best Trick and Waggiest Tail.

Visions is delighted to partner with Super Bock for a unique Visions Beer Garden pop-up, which will also feature a DJ stage with some exciting names including Thris Tian, Charlie Bones (NTS Radio), Fran Lobo and more, and a live art mural commissioned from a special guest to be announced.

Today, we also share details of the Visions Market. You can take part in special t-shirt screen-printing sessions from The Positive Press, have your palm or tarot cards read, visit a pop-up from House of Vintage who will be curating a classic band t-shirt collection, play Beer Pong (hosted by one of our musical acts) and look out for hidden treats from This Must Be For You. Visions is delighted to welcome back Old Habits tattoo parlour for a pop-up event, including a game of ‘Roll The Dice’. The tattoo artists will have 6 designs on offer and Visions goers can get inked with whichever design their dice number corresponds for just £50. Visions also reveals its food traders which include Kalimera, Harley Dogs, Club Mexicana, What The Fattoush and Le Merlin.

Finally, the new Mare Street market space next to Netil Market will feature a take-over with the new Stranger Than Paradise record shop, with DJs from Visions throughout the day as people browse records. Plus there will be DJs across the day on the Netil Rooftop. Visions also announces that there will be a number of After-Parties, all included in the ticket for Visions attendees. They include MILK., an exclusive improvisational set from Yannis Philippakis from Foals and very special guests to be revealed on the day that is set to be an unmissable moment, late night Punk Rock Karaoke, a take-over from Rough Trade Shops DJs and Stranger than Paradise to keep the party going till the early hours.

Focusing on accessibility and highly alternative entertainment, the festival remains an affordably priced ticket at just £30 - with this tier now limited in availability - with a wealth of different acts to see and things to do in some of city’s best new venues and spaces - smack bang in the middle of a hazy London in the mid-summer.