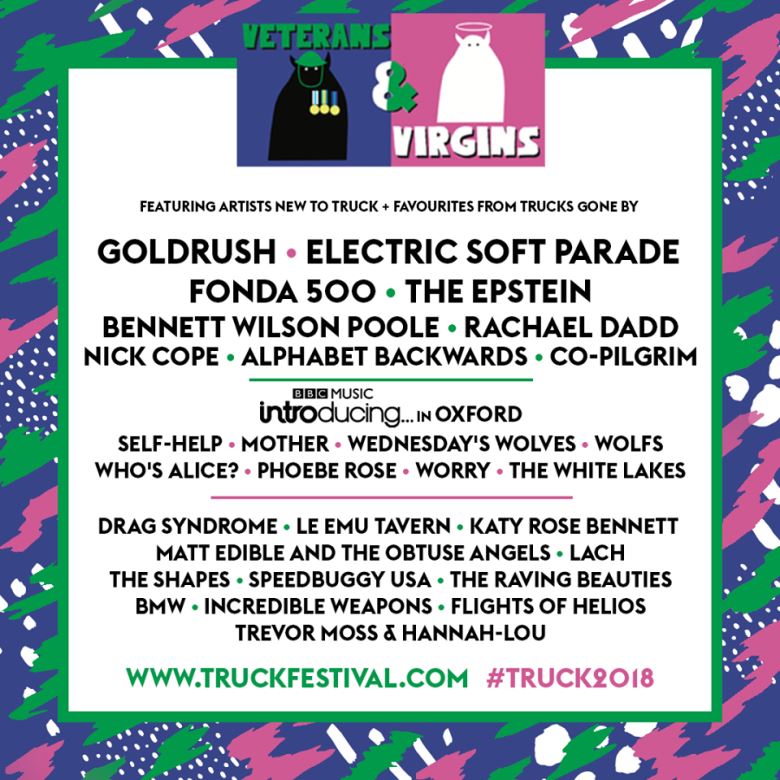 Truck Festival announces the bill for the Veterans & Virgins stage run by Truck's original organiser Joe Bennett. A place for artists new to Truck's field of dreams, and Veterans of Truck festivals gone by...

Friday night is capped off with the return of Trucking heroes Electric Soft Parade, playing a career-spanning best-of set and a special one-off reunion show from Truck founding fathers Goldrush. The Oxfordshire based band features the brothers Robin and Joe Bennett who created Truck Festival back in 1998, they've got an exciting set planned for the 20th anniversary year.

Commented Joe Bennett:"I'm even more excited than usual about the Veterans & Virgins stage this year. As usual there are too many great artists to mention, but I'll mention a few anyway.. it's great to have festival favourites and former Truck Records artists Electric Soft Parade back after a 5-year gap, playing a career-spanning best-of set of their brilliantly-quirky indie-pop, and everyone should experience Drag Syndrome, a unique and magical cross-dressing cabaret show, performed by a range of celebrated actors with down's syndrome (including Steventon's own TV star Otto Baxter). Other highlights I predict will include NYC anti-folk innovator Lach, cornish roots-grunge trio William The Conqueror, experimental folk chanteuse Rachael Dadd and Hull psych-rock lunatic Matt Edible. Of course, I can't not mention how much I'm looking forward to this special one-off Goldrush reunion; it's the first time we've all been in the same place at the same time in more than 10 years, what with Garo here at Truck playing in Gaz Coombes' band, and drummer G visiting from Los Angeles. And since it's Robin's birthday (a big one!), and also 20 years since the first ever Truck Festival, it just felt like the right time to dust off the old hits one more time..!"

Saturday kicks off with superstar children's singer Nick Cope, followed by local acoustic trio BMW, party-kickstarters The Shapes, acoustic songstress Katy Rose Bennett (the artist formerly known as KTB!), and synth-poppers Alphabet Backwards, in what has become a traditional Truck communion with their adoring audience. There's a treat in the form of NYC Anti-folk innovator Lach, and a return for Le Emu Tavern, featuring Holy Roman Empire frontman Ste Fleming (who's promised to roll out some HRE 'hits' as well. Benazir Bhutto anyone? Only the greatest pop song ever written..). We move into Saturday evening with deliciously mental psychedelic-pop from Hull's Matt Edible & The Obtuse Angels, before possibly the most interesting set of the weekend, "Drag Syndrome", a fabulous cross-dressing cabaret show performed by a range of celebrated actors with down's syndrome including Steventon's own TV star Otto Baxter. Trying to follow that(!) will be Romsey/Oxford space-rockers Co-pilgrim, with 4 albums in the last 4 years and a new LP in the offing to draw from, and jangle-pop supergroup Bennett Wilson Poole (featuring Robin from the Dreaming Spires, Danny the Champ, and Carterton-based 12-string guitar legend Tony Poole), before the ultimate lunatic psych-synth-pop party explosion that is Fonda 500 will get everyone conga-ing into the night.

Sunday starts up with brilliant off-kilter pop from Winchester's Incredible Weapons, before a welcome reunion (post child-related musical break!) for Truck-beloved husband and wife folk-pop duo Trevor Moss & Hannah-Lou, a rare appearance for Belfast-expat Brian Bell's fictional power-pop ensemble The Raving Beauties, and a return for the gorgeous drone-dream-pop of Flights Of Helios. We're delighted to welcome back Loose records' Cornish roots-grunge trio William The Conqueror, whose Proud Disturber Of The Peace LP and accompanying live shows have been steadily picking up fans all over the country, and 19 years on from her first appearance we're also thrilled to see experimental folk multi-instrumentalist and chanteuse Rachael Dadd back at Hill Farm. Rounding off a totally brilliant weekend will be Bakersfield, California's rockabilly guitar heroes Speedbuggy USA and Oxfordshire's leading purveyors of beautifully crafted widescreen alt-country The Epstein.