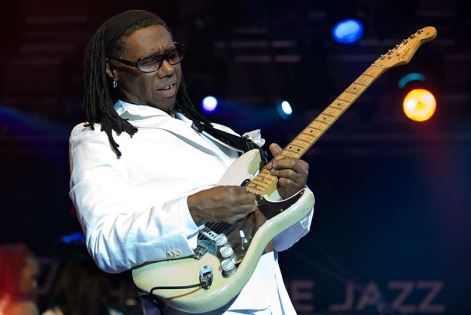 Following the recent additions of The 1975, The Enemy, Gabrielle Aplin and Deap Vally to the line up, we’re delighted to announce the latest wave of acts to join the bill at the 10,000-capacity weekend event.

Jersey Live Festival returns to the Royal Jersey Showground this summer, supported for the 8th year by headline sponsors JT, for its 10th anniversary event.
Joining a Saturday (31st August) Main Stage line up that already includes Fatboy Slim, The Cribs and Clean Bandit are disco legends and one of the most talked-about groups of 2013, Chic featuring Nile Rodgers. One of the defining artists of the 1970s disco explosion, New Yorkers Chic are true icons of pop music, with some of the most instantly recognisable disco classics of the 20th Century including ‘Le Freak’, ‘Everybody Dance’, ‘I Want Your Love’ and ‘Good Times’. Cited as an influence by such a diverse range of artists as Queen, Blondie, Daft Punk, Duran Duran and The Smiths’ Johnny Marr, Chic’s legacy is very much secured and the band were inducted into the Rock n’ Roll Hall of Fame in 2005. Guitarist Nile Rodgers, who founded the band in 1976, went on to become one of the world’s most successful producers, producing Madonna’s ‘Like A Virgin’, David Bowie’s ‘Let’s Dance’, Sister Sledge’s ‘We Are Family’, to name just a few, and this year added his magic, as guitarist, to the biggest hit single of 2013, Daft Punk’s ‘Get Lucky’ – a collaboration that has exposed Rodgers and Chic to a whole new generation of fans. We’re ecstatic to have Rodgers and Chic bringing a touch of New York disco glamour to the Jersey Live Main Stage.
Another addition to the Main Stage’s Saturday line up is folk singer-songwriter Nina Nesbitt, who made her Jersey Live debut at last year’s festival. The 18 year-old Scottish musician has enjoyed a huge year subsequently, embarking on her second UK headline tour last winter and releasing three EPs with Island Records, leading to her biggest chart success to date, her second single ‘Stay Out’ which reached number 21 in the UK Singles Chart in April this year. Having been catapulted to national attention after supporting Ed Sheeran and Example (who discovered her acoustic version of his track ‘Stay Awake’ on Youtube), on tours in 2011 and 2012, Nina has this year truly come into her own as an artist and performer. Her heartfelt lyrics, pure voice and breezy, infectious melodies are sure to be given a warm welcome to Jersey Live again this year, and we’re certainly delighted to have her back.
Set in the lush countryside surrounds of the Parish of Trinity, Jersey Live is the UK’s southernmost festival and with more sunshine than any other part of the British Isles, and one of the warmest, friendliest festival audiences you could hope to encounter, it’s the perfect festival destination.
Keep your eyes peeled for more line up announcements across the seven stages, to be made in the coming weeks!