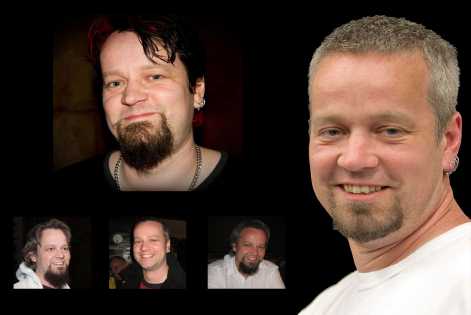 Police say a missing man from Wales Owain Mon Roberts may have been spotted at a North Devon music festival. Can you help? Have you seen him?

Dyfed Powys Police are appealing to anyone involved in festivals this summer to be vigilant and keep a look out for missing person Owain Mon Roberts, 36yrs of Cardigan, West Wales.  Owain is a skilled sound technician at Theatr Mwldan in Cardigan and a lead guitarist with a rock band, he has been missing since Saturday 10 March 2012 and it is very possible that he could be working the festival circuit. Owain's family, friends and colleagues are desperate for him to contact them and are increasingly worried for his safety.

Police have been contacted by a witness, who saw a man that they believe might have been Owain at the Llama festival in Lynton and Lynmouth on Saturday 9 June.

While the witness does not personally know Mr Roberts, they are aware he is missing. The man seen was wearing a black long sleeved hoodie style top, with knee length shorts and a black baseball cap with green writing on it. He had greying hair with a darker beard that may have been plaited or braided in some way.

Inspector Lynn Rees at Aberystwyth Police Station said: "We are appealing to anyone who was at the festival, who may know the identity of this man, or have any knowledge of Owain Roberts's whereabouts to contact Dyfed-Powys Police.”

"We are particularly keen to identify any photographs or video footage of the event that may include footage of the person described, in order to positively identify the person reported as Owain or eliminate this sighting from the enquiry. Owain has played in a band, and worked as a music technician so it is possible that he would attend such a music festival, or potentially work as a sound technician at such an event."

Owain Roberts, a 36 year old man from Cardigan, was last seen on Saturday 10th March 2012.  He left his home in Aberystwyth Road, Cardigan intending to walk to a local beach.  He had arranged to be collected by his father outside the Church of the Holy Cross at Mwnt Beach around Midday; however Owain was not at the meeting point.  We know he arrived at his destination that morning as he sent a photo of the beach in a text message, which is time and date stamped.

Extensive enquiries and searches have been made to find Mr Roberts, however there have been no confirmed sightings of him since Saturday 10th March.  Owain’s family, friends and Dyfed Powys Police are increasingly concerned for his welfare.

Anyone with information is asked to contact Dyfed Powys Police on 101 and ask for Cardigan Police Station.

You might be reading this because you are missing – or lost touch with someone who is missing you. Whatever your situation, we are here to help.

We provide a unique, confidential 24/7 service called Message Home. If you are in crisis, unsure of what to do next or would like to pass a message to someone, please get in touch.

You can text us even if you have no credit left on your mobile phone.