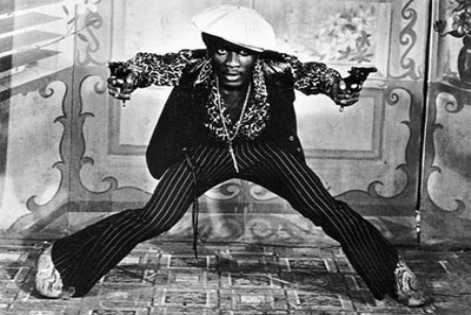 Jimmy Cliff holds a similar position back home in Jamaica, a totemic figure seemingly above the day-to-day lives of mere mortals, a man whose most profound musical moments.

Over the last 30 years of WOMAD’s existence, many, many thousands of performers have graced the festival’s stages. But very few have achieved the worldwide acclaim and iconic status of two of the latest additions to WOMAD Charlton Park 2012 – South Africa’s musical godfather Hugh Masekela and Jamaica’s most prominent living legend Jimmy Cliff.

Hugh’s been on board with WOMAD since the very early days, his first appearance at one of the organisation’s gatherings coming way back in 1984. Since then, his beloved South Africa has undergone many substantial – nay, revolutionary – changes, but Hugh, through his irresistible trumpet playing, maintains the position of rebel statesman. Always with something to say – and always determined to say it.

Jimmy Cliff holds a similar position back home in Jamaica, a totemic figure seemingly above the day-to-day lives of mere mortals, a man whose most profound musical moments – You Can Get It If You Really Want, The Harder They Come, Many Rivers To Cross – continue to inform and inspire today. Along with Toots ‘…and the Maytals’ Hibbert, Jimmy is simply a reggae music deity.

If these two artists’ performances will be red-letter moments for the WOMAD congregation, so too will the presence of The Manganiyar Seduction by Roysten Abel. This 40+-strong gathering of Muslim singers and musicians from Rajasthan would be an intriguing entity if it were simply their music that was under scrutiny. But it’s the setting of their performance that really makes them stand out. Each performer occupies a small pod, framed by a string of lightbulbs light up whenever he’s playing or singing. These pods are stacked four storeys high, creating an extraordinary sight, especially as the music builds and more performers contribute, meaning more pods are illuminated. The Manganiyar Seduction’s Charlton Park appearance is a UK exclusive – this audio-visual spectacle is destined to be one of those I-was-there moments.

In the global village represented by a WOMAD festival, you’d expect more than a little mixing and matching, that a region-specific style of music will be given a re-rub by those from another corner of the world. And so it is this summer. Ben l’Oncle Soul is one such reinterpreter, a young Frenchman re-flavouring the sound of classic soul. And who knew that the French language lent itself so effectively to giving new life to such a familiar sound? Switzerland’s Mama Rosin also take a much-loved American music and invest it with a new sense of purpose. This time, it’s Cajun, the trapped-in-amber sound of the slow-changing Louisiana bayous. These two chaps from the shores of Lake Geneva take the blueprint and make it their own, playing with a mixture of inch-perfect authenticity and innocently fresh eyes.

If the Alps resonating to the sound of Louisiana might appear unlikely, so too does the idea of the bars of counties Donegal and Derry being filled with the music of the Balkans. That’s where Balkan Alien Sound come in, a collection of local players fascinated by the tunes of Eastern Europe and able to perfectly replicate them with passion and gusto.

Talking of Eastern Europe, WOMAD are delighted to be hosting the UK debut of an intriguing collaboration between Finland and Ukraine – Kimmo Pohjonen and DakhaBrakha. Finn Kimmo may already be familiar through the sonic adventures he undertakes while redefining the limits of the humble accordion, but DakhaBrakha are well worth further investigation – a small ensemble of women singers who, while upholding their Ukrainian traditions, specialise in what they themselves call “ethnic chaos”. Female harmonies are also the order of the day when Japan’s Marewrew take to the stage. These four women are guardian of the ancient songs of the Ainu people and together their spiraling voices are both fascinating and beguiling.

As ever, this summer’s Charlton Park affair features plenty for the clubbing class. Secousse featuring Etienne Tron and Mo Laudi is the travelling arm of the much-loved Secousse club night, the occasion where the bright young things of Paris and London get to groove along to the hot new sounds from cities ignored by the record industry. Now it’s the WOMAD faithful’s turn to be thrilled by the latest vinyl coming out of Angola, Brazil, Sierra Leone, wherever…  New Zealand Shapeshifter would argue that you don’t need a big bag of records to thrill clubbers. Heroes to a man back home in Wellington, this five-piece prefer to use good old-fashioned instruments in their live drum & bass, breakbeat and dub. As such, their live reputation remains impeccable.