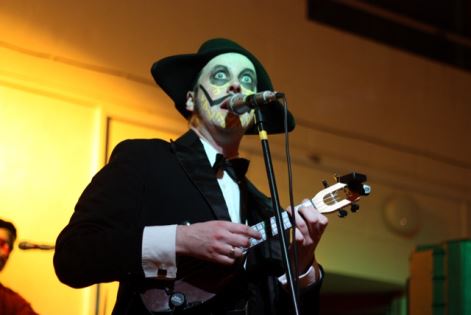 The newly named Argonaut Acoustic Area has confirmed its line up for the 4th outing of North Yorkshire's Willowman Festival.

The highly entertaining Biscuithead and the Biscuit Badgers will headline on Saturday the 22nd June.

Hailing from Leeds, the Biscuitheads have acquired something of a cult following and are regularly played by Tom Robinson on BBC Radio 6.

Virtuosic piano, George Formbyesque ukulele, astounding vocals and an almost comedic tuba have helped create a musical niche for these Leeds likely lads. They are an act which has one foot firmly in the old time music hall past.

Another Leeds performer in the guise of Hayley Gaftarnick has grabbed top acoustic billing for the Friday night.

Soul, acoustic, blues, jazz and country are all on menu for Hayley and her ever versatile sound, with a “Winehouse” career potential, visitors to the Argonaut Acoustic Area will not be disappointed by one of Yorkshire's favourite performers.

Five fellows from South Shields otherwise known as The Lindsay Tin will bring the acoustic stage to a finale on Sunday the 23rd June.

Described as “an exotic business class cruise into the heart of darkness” this North East quintet will serenade those gentle Willow folks with thought provoking insights into the human condition and its many forms.

Other acoustic signings which deserve a mention in dispatches include 10 year old Jacob Darley who has apparently got more talent than “an entire X Factor box set”. Nico Cara a seventeen year old who is attracting attention from major record labels and The Broken Broadcast who promise to bring a slice of west coast Americana to the rural Yorkshire countryside.
The Willowman Festival will take place between the 20th to 23rd June at Hillside Rural Activities Park near Thirsk. Early bird tickets are still available at £50 per adult.

Headline acts confirmed over the summer solstice weekend include The Orb, New Model Army, Space and The Wonder Stuff.