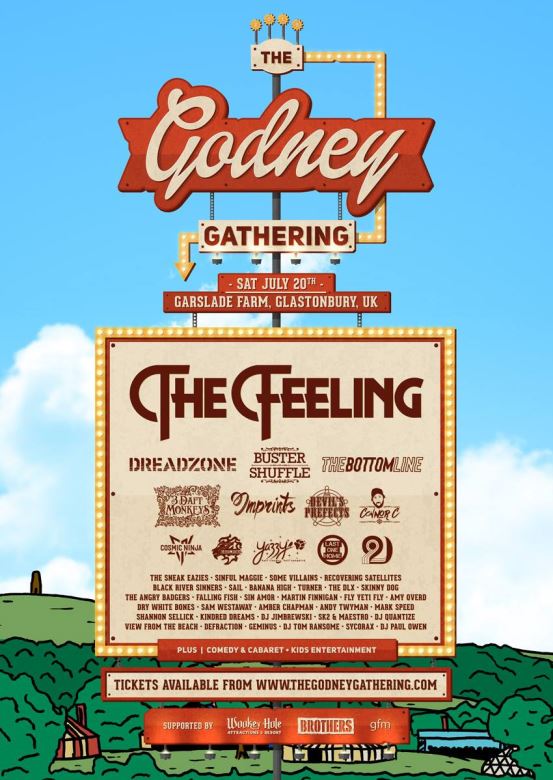 Returning for another jam packed year of musical mayhem and family gatherings, The Godney Gathering is proud to announce another impressive line up. Headlining the Somerset’s one day festival are English rockers The Feeling.

Following a successful run of hits in the naughties, The Feeling have continuously toured around the Country proving each time why we go back for more. Joining them this Summer are local indie rockers Last One Home who have enjoyed a busy couple of years touring the South West and supporting the likes of Crazy Town. Dreadzone and Irie Fire are also in the mix offering the diverse sound we all love at Godney Gathering.

The Festival favourite Silent Disco is back but with a brand new headliner in the shape of Glastonbury based DJ Connor C with 2Drunk2Funk and DJ Paul Owen also heading in to the tent as well as a host of other fantastic DJs to keep you dancing all day long. The GFM stage is also returning this year with another stellar line up which includes Turner, Sail and Black River Sinners who round off a diverse line up.

Returning after an extremely successful set last year are Bristol based electro rockers Cosmic Ninja along with last years Pilton Party winners Some Villains and the energetic Imprints who will ensure you are well and truly warmed up for the headline act.

This year will see the addition of the brand new media area where you will be able to watch interviews with the acts, take photos in the selfie frame as well as other exciting features.

The day is more than just the music though, It's a family day out with affordable food, drink and stalls all around the site.

This year we are very excited to have once again managed to bring some of the most sought-after festival bands the country has to offer...alongside a very strong line up of local bands and performers. We are excited that after trying for a number of years that at long last we have managed to book The Feeling to headline this year's festival. The Feeling have hit after hit and I'm sure it's going to be one massive sing along to close the festival. Mike Daniells – Festival Organiser

Published on 20 January 2019 by Ben Robinson