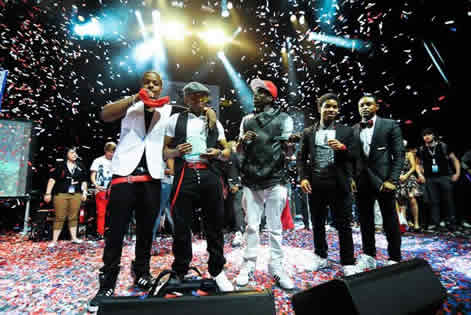 On July 23rd The Trinity Band was crowned Live and Unsigned 2011 winners at London’s O2. It was quite a journey for the five-piece from Derby.

Since then they’ve been getting regional and national attention and have been named on the bills for Ignition festival in Newcastle and Norfolk Spectacular in September. Here, they take us through the experience…
So, the hype around The Trinity Band continues and you’ve been announced on the line-up at Norfolk Spectacular, how do you feel about that then?
Wow! It’s huge! It’s a huge gig with so many of our favourite artists, so to be included on the line-up is an honour and a dream-come-true.
It means you’re on the same line-up as Chase and Status, Example and Professor Green. How does that sound?
What can we say, a week after winning Live and unsigned and were playing with the biggest names in UK music. Dreams are being fulfilled for us right now!! Seriously.
How’s the experience of being Live and Unsigned winners been so far?
So far it has been a 'whirlwind' experience. What can we say it’s all go! The experience has been great and the whole Live and Unsigned team have been 'on point' and very supportive. The future looks bright the future looks 'Trinatronic!'
So is Live & Unsigned the best £10 pounds you’ve ever spent?
(Laughs) Rukus paid for it! He leads the band. It’s funny actually we entered the year before and didn’t make it to our audition but that could be fate. We might not have won it last year but this was our time.  As a band we’ve only been going seriously for a couple of years and we’ve developed an identity now which we may not have had last year.
What was it like getting ready for your first audition?

It was quite an experience actually; we changed the song we were going to perform while in the queue! We had a vote on which one to do then had to rehearse it in front of everyone in the queue, they must have thought ‘who are these jokers’! We were sure the judges didn’t like as because they give no feedback straight away.  It was a real surprise when we were told we were through.
You then brought quite a large following to the live shows, how much did that help?
Our fan base is fantastic. The ’Trinatronic’ people follow us everywhere and they’re always there for us. Having people there definitely helped, they gave us the energy to put in the performances we did. They were shouting our name the whole way through and we had to tell them to tone it down while the other acts were on! It’s always difficult to tie people down to come to gigs but it makes a massive difference once you do get them there.
What was it like being on stage on what is one of the world’s best venues for live music, The O2?
To perform at The O2, it was amazing, it was immense, it was huge. You couldn’t even see the floor and there were a lot of people upstairs but the lights were in my eyes so I couldn’t see them but you could tell there was a vibe there. For us, to be able to put that on our musical C.V. is amazing, just to say that we have actually performed at The O2 is amazing, and that’s down in history now and no one can take that away from us!
So how did The Trinity Band come together?
It used to be a collective called Trinity which was more than just musicians. We had dancers, rappers, singers and everything. We used to put on community shows, plays and dance events and stuff. Then six years ago Rukus was Dwain’s mentor at college and he heard him singing and took him under his wing. Then Rukus saw Craig and James at church and Rukus decided he wanted to develop it. Then we got Pete on board. Pete didn’t even have a bass for the first gig because he’d stopped playing a while ago. He had to borrow one then realised he’d need to buy one again! So it was a collective that evolved. It was a case of if you’re talented enough you can be in it. We’ve probably had a hundred involved through the years but a couple of years ago we decided it was time to unify and focus on a smaller band set-up.
Is commitment the biggest challenge for any aspiring band?
It is. People think we rehearse more than we do. We have difficult job commitments and it’s hard to find the time to practice. But with the unity we have we make it work. Dwain is a new dad and has gone part time at work because he didn’t have time for music, work and family. There was only ever going to be one sacrifice there! You have to be committed to push on and take the next step.
What would you say to bands thinking of entering Live & Unsigned?
Rehearse, rehearse, rehearse! Just go for it. Have an original angle to your music. Don’t watch the competition but chase the dream. Have faith, work hard, do your research, be realistic in song choice, keep your songs current and keep it fresh. Song choice is key. Experiment with the music and see what works. Don’t do a straight cover, make it your own.
What did being part of a competition like Live and Unsigned do for you?
It brings you together and improves you as a band. It sharpens your mentality. You have to have the ability to bounce back though, that’s so important. If you’re in the music industry more doors close than open to begin with. You have to take the knocks. Music is subjective so keep going.
You auditioned in the Midlands as did quite a few others who made the Grand Final. What is it about the midlands, there seems to be a lot of talent around?
I think there’s a lot of hunger in the Midlands at the moment. So many great artists come from London so people feel they need to work harder up here. Also, we’re disconnected from London so we’re all doing our own thing. We’re not watching them, so originality is our strength.
So what was the highlight of your Live and Unsigned journey?
Winning! Wow, it was just the shock when we heard our name. Dwain nearly choked on his chewing gum! It was so surreal it was like slow-motion. It was like a confirmation of our abilities. We always had belief in ourselves but to be told we are the best unsigned band in the UK means a lot.
You’ll want to build on that and use it as a basis. How far do you guys want to go?
Yeah we definitely want to build on that, the sky’s the limit. We want to take it as far as we can go. We want to be known throughout the world as a great, phenomenal band. Live and Unsigned has opened a door for us and it’s up to us what we do from here. When you get an opportunity you’ve got to step into it and work towards something greater, and we are willing to put everything into this thing because we know we’ve got something that can go around the world.
Catch The Trinity Band along with other great names at Norfolk Spectacular on Saturday 3rd September.

Published on 18 August 2011 by Wayne Feltham