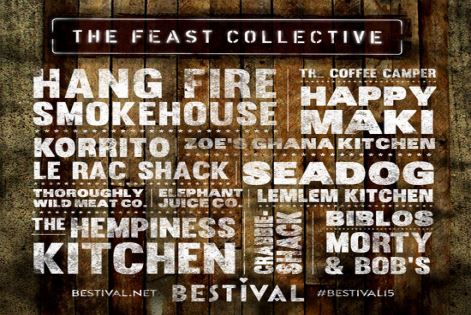 The Feast Collective is returning to Bestival in September, the ultimate festi-food haven! Mouth Watering food will be available to keep you energized over the weekend.

With a wealth of mind-expanding music from Underworld, Duran Duran, Chemical Brothers, Missy Elliot, Tame Impala, The Jacksons, Rudimental (DJ), Skrillex, Annie Mac and many more on offer, Bestival’s Summer of Love this September 10-13 is already shaping up to be utterly legendary. But, as much as we love the music, and we really do, we also love our food too, so we’re mouth-wateringly over the moon to announce the return of the ultimate festi-food haven, The Feast Collective!

Commenting on the Feast Collective’s myriad culinary delights Bestival Creative Crew’s own food whiz, Gemma Thorogood said "We've spent time and a lot of eating seeking out these food monsters for the awesome Feast Collective at Bestival 2015. With nutty satays from Indonesia, cheesy goodness from the French Alps, Afro-tacos from Ethiopia and healthy salads from the Hempiness Kitchen you can tuck in to some truly adventurous and quality food. And the Hang Fire Smokehouse ladies will be spinning their wheels of BBQ steel until the early hours, so you can come by for a midnight snack too!"
Samantha & Shauna from the Hang Fire Smokehouse commented: "We're thrilled and honoured to be asked to host this year’s amazing Feast Collective at Bestival. Expect award-winning BBQ, a honky-tonk hoedown, a dosey doe or two, and thigh-slappin' good times!"

Nestled in the Grassy Hill and featuring artisan food producers, street food messiahs and the very chicest of chefs, this year’s line-up includes Feast Collective hosts Samantha Evans and Shauna Guinn, AKA Hang Fire Smokehouse, who will not only be taking charge of culinary proceedings but also elevating authentic southern state American BBQ to the next level, using sublime British produce.

There will also be wonderfully brewed daily treats whenever you need them and however you’d like them served from The Coffee Camper, truly sustainable sushi which is good for your bodies, good for the oceans, and great for the taste buds from Happy Maki, home spun, home cooked food, merging Ghanaian roots with a modern culinary dining experience courtesy of Zoe's Ghana Kitchen, Korean BBQ bringing the sizzle of Seoul to the Island thanks to Korrito and purveyors of irresistible Alpine dish Raclette, Le Rac Shack.

Plus we’ll have innovative, world inspired dishes using fresh local fish from Seadog, the gorgeous taste of far eastern Rendang from Makatcha, award-winning artisan butchers and cooks theThoroughly Wild Meat Co., Middle Eastern and Caribbean cuisine fast-food fusionists Biblos, Eritrean inspired modern African fare from Lemlem Kitchen, freshly made juices and smoothies from the Elephant Juice Co., London's finest grilled cheese sandwiches brought to the heart of Robin Hill thanks to Morty & Bob’s, mega seafood snacks from Crabbieshack, and embracing the wonders of superfood hemp as a cooking ingredient, The Hempiness Kitchen.
A utopia of yumminess, the Feast Collective is the finest kingdom of cuisine known to festival-land, don’t miss out on its tantalizing charms.