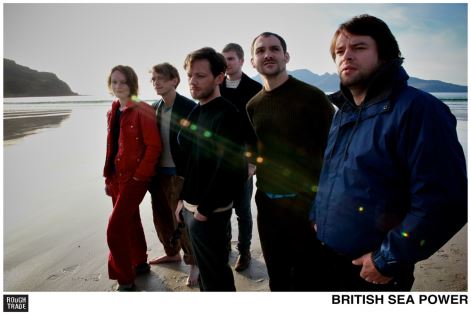 With music fans counting the hours until this year’s spectacular Wickerman Festival, organisers have announced a few final treats in the line-up before the masses descend to Dundrennan on Friday 25th and Saturday 26th July.

Enigmatic indie rockers British Sea Power, once described by The Sunday Times as ‘The best band in Britain’, have stormed into the Summerisle’s Saturday bill, joining Del Amitri and The Feeling amongst many others for what is set to be a day of truly memorable live music.
The Brighton-based six piece, who count David Bowie and Jarvis Cocker amongst their loyal fan base, will bring their sweeping, visceral guitar sounds and legendary eccentric stage antics to the already brilliant main stage line up.
It’s over a decade since British Sea Power launched their debut album, ‘The Decline of British Sea Power’ to huge critical acclaim. Their indie credentials have not waned, and last year’s 2013 album ‘Machineries of Joy’ was hailed as a creative high for the band - with BBC 6Music listeners recently placing their track ‘Remember me’ at number nine in the stations’ stop 100 tracks of all time, slotted between Radiohead and Johnny Cash.
There are also new Saturday additions to the Lowland Links tent, staged by Wickerman Festival as part of Year of Homecoming to showcase the culture of the Dumfries and Galloway area. The rousing sounds of the Creetown Silver Band, a brass band that dates back to 1880 hailing from the local village of Creetown, will join the line up as will Nicola Black, a native of Dumfries and Galloway and the festival’s very own Acoustic Village Manager, who will take her turn in the spotlight on Saturday evening.
There will also be a special treat for music fans when Dumfriesshire Cellist, Alex McQuiston, is joined by top opera singers from the International Musicians Platform to perform a selection of best-loved opera classics – from Nessun Dorma to Tonight from Westside Story for the Wickerman audience.
Finally, the dazzling Eletricat Samba will whip the Wickerman crowd into a full-on Brazilian frenzy, performing briefly on the Summerisle Stage on Saturday before heading out into the arena for some carnival fun with the crowds.