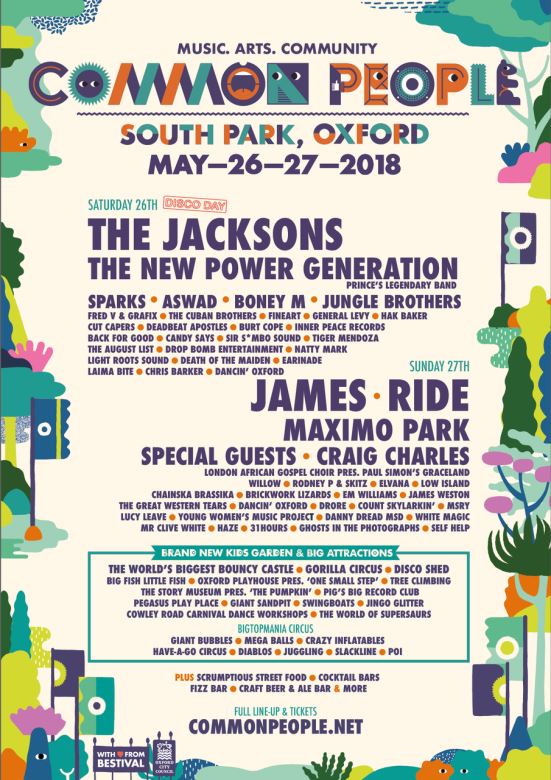 Set to bring you electrifying music, entertainment and arts in the heart of two cities this spring bank holiday, Common People is back for 2018 with headliners Lily Allen, James and The Jacksons.

For just £57.50 for an Adult weekend ticket or £30 for an Adult day ticket, you can enjoy an amazing festival brimful of singalong favourites, deep-down disco delights, and all manner of amusements. Don’t miss out on two joyful days of bank holiday merrymaking brought to you with love by the makers of Bestival, this 26 & 27 May on Southampton Common, and in South Park, Oxford.

Rob da Bank says: “It’s been quite some ride putting together the Common People line ups for 2018. We love Southampton Common and South Park in Oxford, they’ve become two of our favourite places to throw a party... this year will be super special with none other than Lily Allen in Southampton and legendary Oxford band Ride coming back to South Park. Co-headliners James are the cherry on the cake. Our Disco Day also promises to be super funky with The Jacksons bringing their disco and soul classics, but my personal highlight has to be Prince’s unbeatable backing band The New Power Generation coming over from the States for a one-off weekend with us. We couldn’t get Prince but we will have all the hits. Add in all the local bands and DJs and a real focus on family fun and entertainment and I promise you a magical May weekend awaits”.

Back with a bunch of bangers that prove she’s still at the top of the game, Lily Allen headlines Southampton’s Common Stage, along with Manchester legends James for a singalong Saturday special, with sets through the day special guests All Saints, The Sherlocks, Jaguar Skills, The Cuban Brothers, Elvana: Elvis Fronted Nirvana and Plastic Mermaids.

Fancy dress is the order of the day on Saturday in South Park, Oxford as we unleash disco kings, The Jacksons, basking in the dazzling reflection of the World’s Largest Disco Ball. Plus, you can fill your dancing boots with delights from The New Power Generation, Sparks, Boney M, The Cuban Brothers, Aswad, Jungle Brothers, Hak Baker, Cut Capers and Dancin Oxford.

As ever underground players and nascent rock action can be found on the Uncommon Stage hosted by The Joiners in Southampton with sets from Dream Wife, Demob Happy, Pale Seas, The Rising, Ben Goddard and many more. While Oxford’s Uncommon Stage hosted by Nightshift will see appearances from Deadbeat Apostles, Inner Peace Records, Tiger Mendoza, The August List, and many more

We’ll also have throbbing beats at Sugar Skulls in Southampton and the Disco Shed with a roster of soon-to-be-announced DJs and there will be family antics and festivities galore across our Common People wonderlands including the Kids Garden, BigTopMania, and a whole host of local family entertainment.

Published on 18 February 2018 by wayne feltham