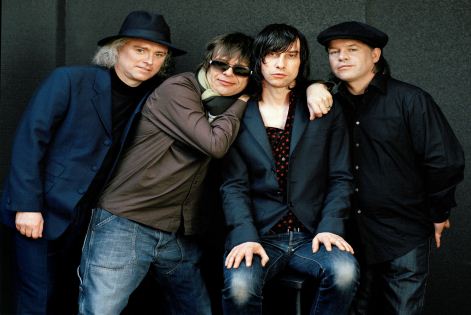 Wickerman, one of Scotland’s best-loved independent music festivals, has revealed that the Friday night headliner for this year’s summer festival will be seminal Scottish rock band Primal Scream.

Also joining the Festival’s red hot line-up will be critically acclaimed duo Public Service Broadcasting, who will inform, educate and entertain festival goers with their original mix of past and present.
On Friday 26th July, Bobby Gillespie and the band will take their iconic style to the stage in what will be Primal Scream’s only Scottish festival appearance this year. Debuting material from their eagerly awaited new album, their first in five years, alongside classic hits from their back catalogue, the influential group will be ‘moving on up’ to the top of the bill with what is set to be an electrifying performance.
Public Service Broadcasting will join them on the Summerisle Stage line up to deliver a unique and spellbinding Wickerman performance, showcasing their signature mix of archive samples, electronic beats and live audio visual transmissions.
The Wickerman Festival provides a valued platform for championing Scottish music and prides itself on presenting the best up-and-coming acts whilst catering for every music taste.  From dance and electronica, to rock, indie, reggae and punk, a plethora of new and established artists across a variety of music genres will be announced over the coming months.
Now in its twelfth year, the two-day Festival will once again come to its legendary and spectacular climax with the Saturday night lighting of the Wickerman, followed by a promise to keep the Wickerman party stoked into the early hours.
Wickerman Festival Coordinator Helen Chalmers is delighted to be revealing the first names for the 2013 event. She commented: ‘Primal Scream is one of Britain’s most iconic, inventive and exciting bands and having them play at Wickerman is a major coup, both for the Festival and its fans.
Once again the full line up will feature an eclectic and sometimes surprising mix of leading artists, alternative acts and exciting emerging talent, so whether its Primal Scream or Public Service Broadcasting stirring up the crowds with sizzling sets, we are certain that Wickerman 2013 will be one of the most relaxed, fun and friendly festivals of the summer!’
About The Wickerman Festival
Wickerman is one of the UK’s best-loved independent music festivals and is now entering its 12th consecutive year. With nine stages featuring an eclectic and exciting mix of leading artists, alternative acts and up and coming talent, the two day summer party caters for all musical tastes.
From the main Summerisle Stage to the Acoustic Village and the punk-driven Scooter Tent...Wickerman acts have included: Scissor Sisters, Texas, The View, Newton Faulkner, Levellers, James, Feeder, The Charlatans and The Coral amongst many others.
It is one of the friendliest festivals in Scotland and with hundreds of music-loving families in attendance each year, there’s a host of cool kids entertainment and activities on offer. The festival site is a working farm in picturesque Dumfries and Galloway; its rolling hills, lush forests and fresh country air make for a refreshing vibe. It is also where the classic 1973 Wicker Man film was made – the inspiration for the festival’s name.
The Wickerman site is a wonderland for adults and children alike with a cinema, fun fair, circus entertainment, grass sledging, mountain biking and array of arts and craft activities scattered throughout its fields. High quality yurts, tipis and cloudhouses and spacious campsites complete the magical festival experience.
Every year the festival stages an unforgettable finale, as thousands of fans flock to watch a towering 40ft Wickerman be spectacularly set alight
Primal Scream
Primal Scream is made up of Bobby Gillespie (lead vocals), Andrew Innes and Barrie Cadogan (guitars), Darrin Mooney (drums), Martin Duffy (keyboards) and Simone Butler (bass).
Winners of the first ever Mercury Music Prize for 1991’s Screamadelica, Primal Scream have influenced a generation of fans and bands alike over their 20 year career. Bestowed with NME¹s Godlike Genius Award in March 2007, Primal Scream remain one of Britain’s most exciting and inventive bands.  They’re currently working on a new LP, due for release in spring 2013

Published on 18 January 2013 by Ben Robinson