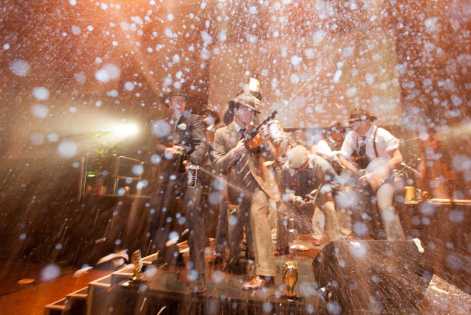 From the creators of Secret Cinema, Future Cinema will host three unique cinematic spectaculars at Wilderness 2012 including the grand finale of their hugely successful 'Bugsy Malone' show performed across the whole event site. This exclusive festival film partnership will also include The Other Cinema’s presentation of ‘La Haine’ featuring a live re-score by Asian Dub Foundation with more announcements coming soon.
May 17h – Wilderness and Future Cinema proudly announce an exclusive festival film partnership taking over the majestic Cornbury Park in Oxfordshire, 10th-12th August.
Fabien Riggall, founder and creative director of Future Cinema says: “We are really excited to come to Wilderness Festival, which we see as one of the most exciting new arts festivals around. We are looking to transform the entire site into Bugsy Malone for the opening night with the biggest splurge fight ever staged, then creating a secret event in the woods on the Saturday night and closing with the incredible Asian Dub Foundation playing live to La Haine on Sunday.”
On Friday 10th August, Future Cinema will transform the Wilderness site into 1920s New York as they bring their all singing, all dancing production of Bugsy Malone to the wild.
Throughout the day, Future Cinema will take over the entire site with prohibition pop-up parties, competing speakeasy hideaways and splurge-gun shenanigans. The evening will finish with an outdoor feature presentation of the original film accompanied by Future Cinema’s full-cast of Bugsy characters performing scenes, sideshows and cirque stunts in an immersive main stage extravaganza. Once Fat Sam's empire has fallen there will be a late night celebration at Dandy Dan's Woodland Speakeasy
On Saturday, Future Cinema will present a surprise guest in the woodland glades. Clues will be revealed leading up to the festival.
The Sunday night of the festival will see The Other Cinema’s presentation of the iconic 1990s film ‘La Haine’ with a re-score performed live by Asian Dub Foundation. A presentation of live graffiti artists, break dancers and spoken word artists will also perform in what promises to be a dynamic and inspirational closing finale of this year’s Wilderness.
Wilderness organiser Tim Harvey says:
“Wilderness has always sought to break the normal conventions of mainstream festivals and this exclusive festival film partnership does exactly that. For us, it's about delivering cultural experiences that are individually tailored to the majestic landscape of Cornbury Park and we're delighted to have the Future Cinema team create a series of truly ambitious cinematic happenings over each of the three days this August. The Bugsy take-over on Friday night will be an astonishing spectacle and one that adds yet another really unique dimension to the show and we look forward to welcoming both Future Cinema and Secret Cinema's audience to Wilderness this August.”