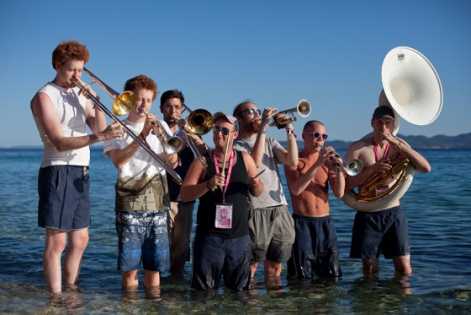 The Riot Jazz Brass Band are the artists in residence, the masters of ceremonies who ventured from their arena and graced the main stage last year.

Roll up, roll up as quirky festival area Riot Jazz returns bigger and more magical than ever before. Riot Jazz is one of Kendal Calling’s best-loved areas that this year embraces the festival fancy dress theme, Fairy Tales & Comic Books, and takes it to the next level. Step into a real life festival fairytale with ‘The Great Puppet Show’ that will transform a corner of the Kendal Calling fields with plenty of antics, art installations, eye catching décor designs and a host of circus performers & eclectic musicians. Riot Jazz brings an area of true escapism, it’s weird and wonderful and full of hidden musical gems to discover.

The Riot Jazz Brass Band are the artists in residence, the masters of ceremonies who ventured from their arena and graced the main stage last year. Fronted by MC Chunky, the band has performed across the globe from Finland to Croatia delivering high-octane shows. As well as hosting the Riot Jazz area, the band have a debut album coming soon that captures their unique talents in time for Summer.

Other highlights on the bill include Honeyfeet; who has been described as a songbird of her generation with a full live band to support her electric sound. Also joining the bill is Lauren Housley, a bright artist from Yorkshire who is redefining Northern Soul as she conjures a warm, organic soundscape with a fresh, full voice that references Dusty Springfield with the virility of Ray Charles.

Live favourites The Whisky Cats make a welcome return to the festival, with their hazardous and original get up. Their authentic sound and unique theatrical approach to performing has prompted people into saying that they are one of the best live acts in the country. Their sound is so diverse that ex-Blur bassist Alex James said Whisky Cats 'don't sound like anyone else in the world'

Aside from the music they’ll be a whole host of entertainment with performance art, circus troupes and vaudeville amusements. Riot Jazz is a true trip into a land of legend and fairytales, where costumes and decor transform reality, dusk turns into dawn and strangers become friends. Immerse in this adult wonderland armed with weapons of mass distraction. Experience and hear something new, Riot Jazz has landed.