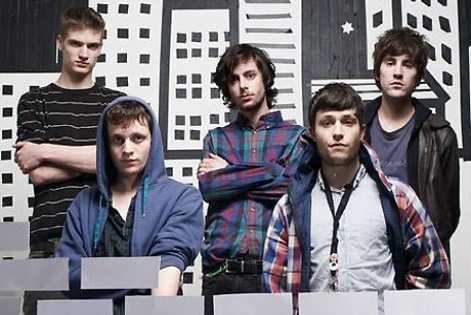 The Maccabees are no doubt the apple of the music industry's eye for 2012, having been announced for only three other UK festivals, Beach Break Live is proud to confirm the band for 2012's event.

The Maccabees join the biggest Beach Break Live line-up ever along with Dry The River, Lulu James, Charlotte O'Connor, Levi Roots, Eats Everything, Phaeleh, BBC Radio 1s Andy George & Jaymo along with 100 other additions. As one of the few festival appearances that The Maccabees are making this summer, Beach Break Live is extraordinarily excited to welcome the band of the moment to their 8-mile award winning beach venue. See the festival site from a birds eye view with the new video HERE. 20,000 festival goers will enjoy artists such as Dizzee Rascal, Chase & Status, Friendly Fires, Labrinth, Maverick Sabre, Nero, Toddla T and Ben Howard all for £109, and at only £3 for a pint what more could revellers want?!
The Maccabees are no doubt the apple of the music industry's eye for 2012, having been announced for only three other UK festivals, Beach Break Live is proud to confirm the band for 2012's event. The Brighton boys will be performing on Sunday 17th June at the UK's student festival, their album Given To The Wild has achieved huge critical and commercial success and the band are one of the most sort after groups of the moment. Next up is Dry The River, the recent album from the boys, Shallow Bed has received great reviews and they are tipped to become the next big thing throughout 2012 and 2013, no doubt the band will receive unrivaled support from the crowds at Beach Break Live this summer.
Lulu James is also announced for this year's Beach Break Live, the 21year old is on the brink of releasing her first album and is definitely a name to remember, offering vocals well beyond her years the soulful singer is set for success with her boundary-defying electronic melodic sounds. Another bright young spark also announced today, Charlotte O'Conner, who is set to release her first single, Addicted, in May, offers up a refreshing take on the acoustic folk sound.
Levi Roots is joining the pumping Beach Break Live line-up for 2012, hot hot hot is the only sauce that Levi will be bringing to the festival for 2012. Eats Everything aka, Bristonlian Daniel Pearce will be returning close to home this summer as he joins the outdoor Ghettoblaster stage. In a matter of months he has defined a whole new genre of forward-thinking underground house music that draws elements from classic house, UK bass music, Detroit techno, jungle and early rave, Beach Break Live dance fans are in for a treat this year!
A host of DJs is set to join the likes of Dutty Dan, dubstep hero Phaeleh and BBC Radio 1 DJs Andy George & Jaymo, who are famed for their globally recognised night Moda and impressing DJ dynasties such as Kissy Sell Out. In a tough year for UK festivals, many UK festivals are thriving and Beach Break Live is at the forefront. Offering a host of phenomenal entertainment for only £1 an hour, festival goers can horse ride, Zorb along the beach, snowboard, ski, wake-board, roller skate and even take to a forest hot tub, all for just £109.
If all this isn't enough the legendary Southern Comfort Juke Joint will be joining the eclectic mix of new and old Beach Break Live venues including SuperFunk Roller Disco, Ghetto Palace, Chai Wallah, The Tub with a View, Moustache Bar and the infamous Merlin’s Forest! Southern Comfort will be opening the doors at Beach Break live to the original Louisiana party, mixing up Southern Comfort cocktails, old school horns and hot new DJs to keep the volume turned up and bodies swaying into the small hours.