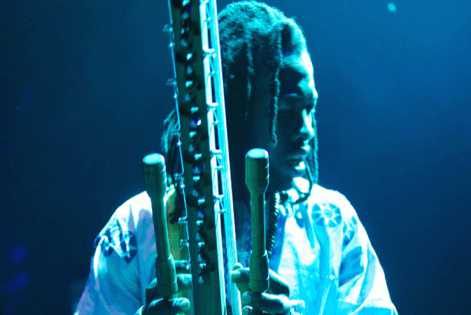 The Africa Express Sound System is hitting Brighton on the 12th of May for a night of deep African electronic exploration. featuring master Cuban and Gambian percussionists, Senegalese kora player, vocalists from Ghana, Zanzibar and Soweto, the fines

Africa Express Sound System (AESS) brings together the best and brightest musicians from Africa and the West to collaborate in hugely-acclaimed one-off shows. Each one is different, with new artists coming together to explore new frontiers and develop new sounds. Now Brighton’s Great Escape Festival is giving you the chance to catch this convention-defying collective on 12th May at the Brighton Dome.
Among those artists coming along for their Great Escape gig* are the following - and there will be more:
Diabel Cissoko - long one of the most intriguing figures on the Senegalese music scene, combining diverse influences with traditional instruments and heritage.
Jesse Hackett (Elmore Judd / Gorillaz / Owiny Sigoma ) - acts as musical director of AESS when not providing keyboards for Gorillaz.
Spoek Mathambo - MOBO-nominated DJ and producer hailing from South Africa and making huge waves around the world for both his tunes and his amazing videos.
John McClure (Reverend and the Makers) fast-talking frontman of British indie sensations Reverend & the Makers, about to release their much-anticipated third album.
M3NSA - Ghanaian hip hop pioneer, dividing his time between producing and rapping. Currently can be heard on the new Rocketjuice and the Moon album.
Shingai Shoniwa (Noisettes) - The charismatic front woman of the Noisettes is one of the most distinctive voices in contemporary British indie.
Mim Suleiman - from Zanzibar, she defies categorisation but has been described as ‘Miriam Makeba meets Aretha Franklin’.
Thristian ‘bpm’ (Boiler Room) – DJ and Producer with world-leading underground music show The Boiler Room.
Terri Walker - Legendary British singer/songwriter and a cornerstone of the UK soul scene.
Jesse Hackett said “Africa Express has been a truly life changing experience.  Since Mali in 2006 it’s had a profound effect on me spiritually and musically.  Each trip brought a new mind blowing set of sensations, musical inspiration and weird and wonderful times. My love for African music the people and the continent has grown steadily it is a great honour to have met all these brilliant musicians and seen these places in my life. becoming musical director for the Africa express sound system is an honour and  will hopefully give me a opportunity to let some of this crazy collection of experience flow through the music along with the brilliant band we have assembled .....
The Africa Express Sound System is hitting Brighton on the 12th of May for a night of deep African electronic exploration. featuring master Cuban and Gambian percussionists, Senegalese kora player, vocalists from Ghana, Zanzibar and Soweto, the finest producers / DJS and a whole host of amazing UK singers and surprise artists . Expect a joyous spontaneous heavy and mind altering journey into the unknown”
Mensa said “Brilliant! I can't wait to see what we cook up this time! Free spirited super talented artists all in one magical cooking pot! I'm always as pleasantly surprised as the audience themselves!”