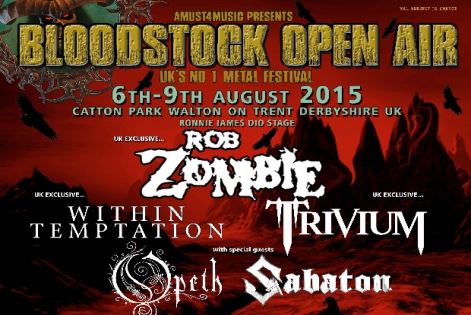 Feeling the winter chill creeping in? BLOODSTOCK to the rescue then, with three more bands announced to get you hot under the collar.

Norwegian extremists ENSLAVED are added to BLOODSTOCK’s Main Stage next summer.  With a new album due in March 2015 via Nuclear Blast, expect to bang your head to some brand new tunes.  Guitarist Ivar Bjørnson states; “We’ve been to BLOODSTOCK once before in 2009, and not only did we understand then why it has become the most important UK Metal festival – but it has grown to mammoth-proportions since.  In sum; what an absolute pleasure and honour to be invited back.  We like to think that we too have developed somewhat; having a few new, pretty awesome albums and world tours under our (over-stretched) belts.  We can’t wait to come and show the BLOODSTOCK crowd what we’ve been up to.  To quote one of our spiritual beacons; General Melchett: “If nothing else works, a total pig-headed unwillingness to look facts in the face will see us through.”  While you ponder the awesomeness of that Blackadder reference and how much you love ENSLAVED.
Hailing from the frozen wilds of Finland, folk metal six-piece KORPIKLAANI are set to join the fray in a UK exclusive appearance. Guitarist Country Cane tells us; "After having great fun and sold out shows ?with our good friends in Sabaton and TÝR, we are excited to be back in the UK to play Bloodstock in 2015.  We plan to return and get the crowds singing and dancing Korpiklaani style on our next rock n roll adventure”.  Feast your eyes and ears on the official video for ‘Rauta’, from the 2012 Nuclear Blast-released album, ‘Manala’, at: http://youtu.be/PJwo6bMKBaw. The band have been taking their special blend of folk and metal all over the world since the release of their eighth album, performing as far afield as China and South America!
New York hardcore stalwarts, PRO-PAIN will also be decimating the Main Stage.  Formed all the way back in 1991, these guys have a whopping fourteen studio albums to pick the set list from, not least their latest pummeling opus, ‘The Final Revolution’.
BLOODSTOCK’s limited batch of early bird weekend tickets with camping are available now, priced £120 (plus booking fee) When they’re gone, they’re gone, so grab yours at the discounted price!  Guaranteed delivery before Christmas, so they make great Xmas gifts!  Campervan pitches are also getting low, so if you want these, pick yours up ASAP to avoid disappointment. While you’re picking up your tickets, check out the new BLOODSTOCK trailer and get excited for next August....

Already announced for 2015 are headliners WITHIN TEMPTATION, and ROB ZOMBIE with his full production and TRIVIUM, special guests OPETH and SABATON, plus CANNIBAL CORPSE, IHSAHN, SEPULTURA, ORANGE GOBLIN, DEATH TA, NUCLEAR ASSAULT, 1349, DARK ANGEL, ENSIFERUM, BELPHEGOR, OVERKILL, AGALLOCH, and ARMORED SAINT.   More bands will be announced soon!
BLOODSTOCK will be held at Catton Park, Derbyshire on 6th-9th August 2015.  Keep up to date with the very latest info on BLOODSTOCK’s official sites at www.facebook.com/bloodstock and www.bloodstock.uk.com.