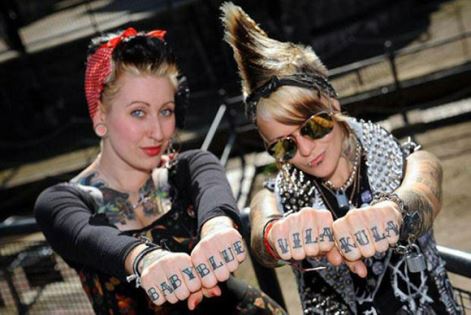 Even more phenomenal artists, attractions and acts have been confirmed for the 9th London International Tattoo Convention, the greatest, most respected and prestigious body art convention in the world.

The London International Tattoo Convention is taking place over the weekend of 27th, 28th and 29th September at Tobacco Dock, 50 Porters Walk, London E1W 2SF.
Miami Ink TV star Chris Garver will fly in to London to join his previously announced Miami Ink star colleague Ami James, plus Tim Hendricks of NY Ink, Oliver Peck of Ink Master USA, Tattoo Baby of Ink Master USA and Juan Salgado of Ink Master USA.
Risqué raven haired vixen Beatrix Von Bourbon, who has been voted one of 21st Century Burlesque’s top 50 burlesque artists worldwide for the last 4 years running, has been confirmed to star on the Main Stage at various times over the weekend.  In Spring 2012 Beatrix’s controversial appearance on Britain's Got Talent (Series 6) live semi-final, watched by over 8 million viewers, sparked an Ofcom investigation, which found her act to be ‘on the margins of acceptability’. Not one to miss then! www.vonbourbon.com
Simon Chainey Tattoo Fire Performer has also been added as a main stage attraction. An incredibly skilled high energy fire performer who turned his love of circus skills from a hobby into a full time profession several years ago, Simon has devised a spectacular solo set for the convention.  www.simonchainey.com
Power Trio The Dirty Johnsons, who have been described as one of the most incendiary live acts in the UK, have been added to the Voodoo Crypt stage. Fronted by the formidable Pussycat, who is renowned for prowling the audience while the adrenalin fuelled band pound out their infectious blend of punky rock ‘n’ roll, The Dirty Johnsons’ high impact, raw, energetic show is bound to astound. www.thedirtyjohnsons.com
Old school R & B Rockers Snatch It Back, founded by former Groundhogs drummer Ken Pustelnik, who play an oddly irresistible hybrid of R & B, Swing, and Psychedelic Blues Rock, have been confirmed to play on the Voodoo Crypt stage.
Gorgeous lingerie / glamour model Ellis Cooper will be at the Convention all weekend, introducing her exclusive merchandise, and signing copies of her 2014 calendar.

Published on 16 September 2013 by Ben Robinson