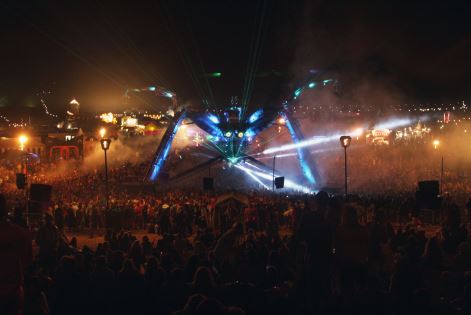 BoomTown Fair has again wowed its attendees by putting on one of the most diverse and eclectic festivals of the summer!

Taking place from 8th – 11th August at the Matterly Estate near Winchester, the 30,000 capacity event saw a different site layout with the separation of the seven districts, resulting in unique areas to explore and a plethora of characters to discover! The weekend witnessed masses of smiles,  streaming sun shine and enough madness so satisfy everyone for a whole year, as well as all the top notch artists on the bill including Ozomatli, Arrested Development, Parov Stelar Band, Lee Scratch Perry, Julian Marley, who wowed the crowd and shone amongst the sets and stages of BoomTown’s winding streets!
The new Lion’s Den stage blew the place into orbit with its impressive 15 meter high Aztec temple façade; the effort and artistic skill that went into the new set created the impression it had been left untouched for hundreds of years, just waiting for BoomTown to discover and showcase some of the best international reggae and dub acts around! There were so many highlights kicking off with Gentlemen’s Dub Club as the perfect opening headline act and set the precedent at the highest level! And it stayed there all weekend culminating in a stellar Sunday night with Collie Buddz, Richie Spice and Gentleman all playing their part in ramping the stage up to an impressive finale, perfectly fit for BoomTown’s reggae loving residents!
Arcadia were back and on fine form! Doing things the only way they know how, with bangs, flashes and loads of lasers! For many, their explosive and interactive Spider sculpture was once again one of the highlights of the show and with the likes of LTJ Bukem, Hotcakes, DJ Zinc and Calyx and Teebee taking to the most unique DJ booth in the world, the party was on and the tunes massive!
There were also new areas and stages to welcome; Tribe of Frog was a late night and day time hot spot for the psy-trance loving festival goer. Set under a canopy of trees, with dappled sunshine and sand under foot, it transported people out of field in the UK and on to a beach far, far away and provided one of the best chilled out party spots at the festival. New districts Barrio Loco and China town offered a slightly different perspective on things, in the heart of Downtown Boomtown there was much to be discovered through all the winding streets and shop front sets, the amount of hidden passage ways and secret entrances made for endless wormholes and access to other worldly dimensions!
The expansion of the Eco Bond proved to be very popular, with thousands of festival goers filling their sacks and taking to the various drop off points across the site, with almost 90% of BoomTown residents ensuring the site was kept tidy for most of the weekend, and was relatively spotless by midday on Monday!
The pre-event anti-tagging and anti-drugs campaigns from BoomTown organisers alongside the close working relationship the festival has with Hampshire Police, saw positive results with arrest figures down from last year.
There was one major incident where a young woman was taken ill and rushed to hospital in the evening of Thursday 8th August and was very sadly pronounced dead on arrival. BoomTown Fair send their deepest sympathies to her family and friends at this very hard time.