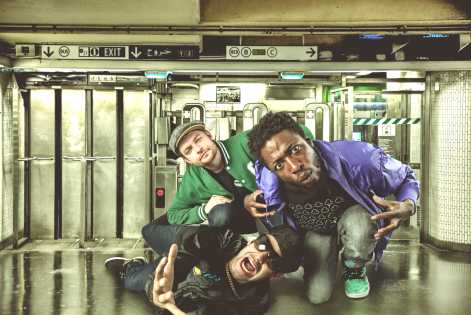 Following breakup of The King Blues, Redfest looks to get noisy Sunday night as Foreign Beggars are confirmed in headline slot.

The King Blues, previously due to headline independent music festival Redfest, officially broke up on the 2nd April, saying on their website that “we have taken things as far as they can go”. Instead, to fans’ delight, white-hot act Foreign Beggars are bringing their legendary live show- a feverish frenzy of grime, dubstep, drum and bass and rap - to the Redfest Sunday night headline slot.

Foreign Beggars have a combined viewing figure of well over 20,000,000+ Youtube hits, and have collaborated with multi-Grammy winning artist Skrillex as well as Noisia, Flux Pavilion and Vato Gonzalez. The Vato Gonzalez/Foreign Beggars collaboration track 'Badman Riddim' reached top 10 on the UK Singles Chart in June 2011.

The band will be making its way round Europe, Japan and the UK before playing at Redfest on Sunday 22 July.

With a line-up that includes Alt-Rock exponents KIDS IN GLASS HOUSES, Dubstep dance floor devastators, MODESTEP, bonafide stadium rockers YOUNG GUNS and Norfolk alt-rock outfit DEAF HAVANA, this year’s Redfest is shaping up to be the best yet.

Foreign Beggars said "Redfest is gonna go off – we are real excited to be playing this one."

Redfest is a staunchly independent music festival close to London that is proud of its reputation for championing new, emerging bands, solo artists and DJs. The festival takes place this year from 20 - 22 June.