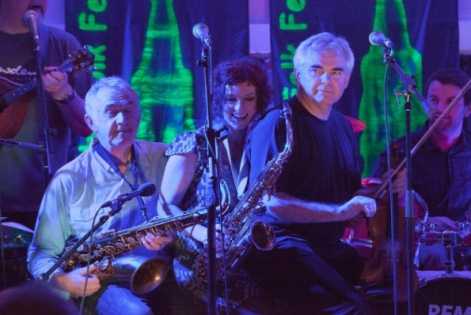 The Beverley Festival have announced more new acts performing this year including The Mighty Doonans along with a new festival patron, BBCR2’s Mike Harding.

Mike Harding, a new Patron for the Beverley Festival, obviously believes Beverley is the festival to be at this Summer.  Presenter of BBC Radio 2’s folk show on Wednesday nights, he has been a good friend and follower of the festival for many years. The festival is delighted to have him on board demonstrating his trust in the weekend as a great event.

“Beverley has always been a special festival for me. It's not too big and they always have some great acts. Held in the beautiful market town of Beverley, in the heart of the East Yorkshire Wolds, winning acclaim as one of the best small festivals in the country and one of the most family friendly.  With this year’s attractions – Steeleye Span, Peatbog Faeries, Chumbawamba, Martin Carthy, up and coming young band ahab, plus special guest - 60's Rock & Roller Joe Brown, it looks likely to maintain its deserved reputation.” Mike Harding

Responses from audiences agreed with Mike, voting - the line-up, the great location, and the friendliness of the event amongst its most popular attractions. “The intimacy of the Beverley Festival, with its palpable sense of community and warmth, is very much a part of the lure”…... “Really good festival. Liked the combination of main events being in a building and others in marquees.  Great atmosphere” ….“What a thoroughly entertaining event and such distinctively different styles, it was a good choice of programming. In addition the icing on the cake was the bar and excellent Festival Ale, We thought the atmosphere very friendly and indeed so in the town”.

On the edge of Hockney country and only a short drive from the east coast’s Heritage Coast and its sandy beaches and tall cliffs, it makes a great place for a weekend away – lots of music as well as places to go for a bit of time out.

The festival is renowned for always producing a great and innovative line-up, with a combination of artists that will not be seen at other events around the country this summer.

The legendary folk rockers Steeleye Span and Joe Brown head the bill this year along with Celtic dance phenomenon the Peatbog Faeries.  The latest addition to the line up is the amazing new band The Mighty Doonans. This new band has developed from the redoubtable Doonan Family Band who have been part of the English folk scene for many years. The Doonans have a deserved reputation for their imaginative and innovative interpretations of traditional songs and ability to introduce other genres of music and dance to their thoroughly entertaining performances. The line up includes Mick Doonan, Phil Murray, Kevin Doonan, Stu Luckley, Ian Fairbairn, Rosie Doonan, Jamie Luckley, Ben Murray and Frances Doonan.

Rosie Doonan has been touring with Peter Gabriel as part of his band and support – she was recently spotted on BBC2 adding vocals when they performed on ‘Later with Jools Holland.’ She will be joining him again for dates this year – no doubt including again the stunning duet on the classic ‘Don’t Give Up.’

From the USA comes the amazing Abigail Washburn with Kai Welch who will be performing on Friday night along with popular Scottish band Shooglenifty who will be treating festival goers to their special brand of “acid-croft.”