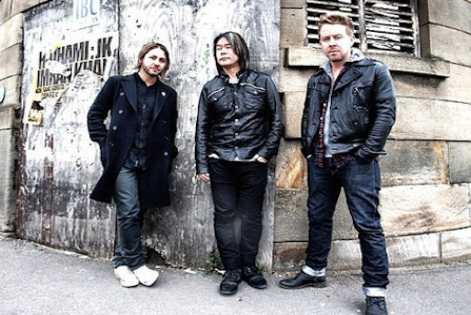 Feeder, Echo & The Bunnymen, The Hoosiers, are just some of the first names to be announced for the tenth anniversary of The Wickerman Festival.

Highlights on the main Summerisle Stage include Feeder who will entertain with hits from their 20-year career including ‘Buck Rogers’, ‘Just the Way I’m Feeling’ and ‘Shatter’.
The band’s lead singer and guitarist Grant Nicholas said, “The Wickerman Festival’s reputation precedes it as being one of the most diverse in the UK.  This will be our first ever appearance and we’re honoured to be headlining the main Summerisle Stage in their tenth year. Even better, playing on the Saturday night is an added bonus as it means we’ll get to stay on and watch the wickerman burn!”
Further main stage highlights will be Echo & The Bunnymen, who have enjoyed a career spanning over thirty years, and The Hoosiers, whose current album ‘Bumpy Ride’ was released this week.
Craig Charles Funk & Soul Club will perform the DJ set that follows the famous Saturday night wickerman burning, with further stand out performances planned with veteran Scottish pop group The Bluebells, Wickerman favourites The Dangleberries and Edinburgh newcomers The Stagger Rats.
The Damned and From The Jam head up the ever popular Scooter Tent with King Kurt, Spunge and Department S also on the bill. While Utah Saints and Riva Starr are two of the headline DJs performing in Bass Camp Dance Village with a whole wealth of talent still to be announced.
Meanwhile, up and coming new-folk group Matthew and the Atlas will perform in the Acoustic Tent.
Festival coordinator, Helen Chalmers, said; “In celebration of our tenth year we have extended our site to include ten stages so we can offer an even greater mix of established acts and future stars for the 15,000+ music lovers who will attend.”
Taking place on Friday 22 and Saturday 23 July at East Kirkcarswell Farm in Dumfries & Galloway, the tenth festival will feature ten stages, including the Summerisle Stage, Scooter Tent, The Acoustic Village, Axis Sound System Reggae Tent, Bass Camp, Greenman Inn, Headphone Arena, Ho Down Wendy House, Solus and for the first time the goNORTH Festival Tour Stage.