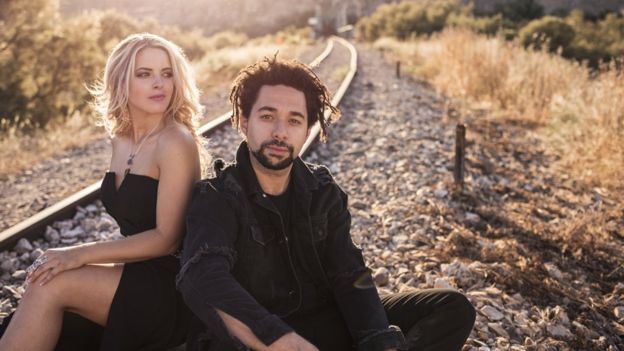 CHAGSTOCK FESTIVAL organisers have announced that UK country superstars, The Shires will headline the main stage on Saturday night.

Hailing from the Home Counties, The Shires made music history by becoming the first UK country act to score a Top 10 album. The duo are at the forefront of the British country music movement and the runaway success of their recently released album ‘My Universe’ has made them not just the fastest selling UK country artist ever, but one of the biggest-selling breakthrough UK acts of any genre in recent years. Across their two albums, Ben and Crissie have had 5 singles ‘A-listed’ by BBC Radio 2 and appeared on a string of high profile TV shows including Graham Norton, the BBC Music Awards and Children in Need Rocks.

Having headlined the prestigious Acoustic Stage at Glastonbury last summer, we are delighted that The Shires will be bringing their uniquely British take on Country Music to our beautiful shire this July.

Skinny Lister are a high energy six-piece British folk band signed to cult label Xtra Mile in the UK, alongside the likes of Frank Turner and Against Me! Over their 7 year career they have released three critically acclaimed albums, the most recent of which, ‘The Devil, the Heart, and the Fight’ was awarded 5/5 by The Independent. Skinny Lister’s infamous live show has blown away audiences on both sides of the Atlantic; in the UK they have performed at virtually every major festival, including Glastonbury, Reading & Leeds and Isle Of Wight, and just some of their USA highlights including joining the Vans Warped Tour and appearances at both SXSW and Coachella.

Slamboree are fast becoming one of the most sought after bands on the scene. Almost certainly the world’s first ‘Pyro-Circus Rave Massive’ act, they are more than just a collection of musicians. Fusing high octane, fire-breathing circus performance with music that can be best described as ‘traditional Balkan folk crossed with full on wobbly bassline rave’, they are not to be missed!

Soul II Soul need little introduction. Best known for timeless classics Back To Life and breakthrough smash hit Keep On Movin’, they’ve sold over 10 million albums, performed live in over 20 countries, and headlined some of the most famous venues in the world. They’ve been recognised throughout their 29-year career, winning 2 Grammies and being nominated for 5 Brits.

Hailing from Bangalore in Southern India, Raghu Dixit's music is a seamless weaving of Indian ethnic folk, Sufi and classical with other traditional and contemporary influences from across the globe. His lyrics, though intense, are simple and speak about every common man's emotions and experiences, and his unique songwriting and vocal delivery have earned him a treasured place in the both the traditional and contemporary Folk & World music scenes. Raghu is also a hugely successful film composer, having scored more than 20 movies in five different languages.

Led by indefatigable south-Londoner Barry Ashworth, The Dub Pistols have lived every rock ’n’ roll cliché more vividly, knowingly and hilariously than almost any other British band. They’ve burned through record labels, band members, and hundreds of thousands of pounds with their almost heroic devotion to hedonism. Yet they have worked with heroes like The Specials, Busta Rhymes, Horace Andy, Madness and Gregory Isaacs and in this, their 20th Anniversary year, The Dub Pistols are busier than ever.

Mr Tea & The Minions are, in their own words “On a mission to spread fun, cheekiness and crazy dancing to audiences everywhere”. With their brand of Gypsy flavoured party music sure to put a smile on your face and your knees up in the air, they are sure to fit right in at Chagstock!

Also confirmed is Billy Rowan, aka The Undercover Hippy who’s unconventional take on the singer/songwriter genre brings together acoustic guitar, soulful vocals, infectious reggae rhythms, and – as a former Drum N Bass impresario - the lyrical delivery of a skilled MC.

Taking place on Friday 21st and Saturday 22nd July, Chagstock will once again showcase the very finest music, food and entertainment from the Westcountry and beyond.

Set in 70 acres of farmland on the edge of Dartmoor, Chagstock is renowned for its stunning location, diverse line-up of artists and non-corporate, family friendly atmosphere. Chagstock showcases the very best music, food and entertainment that the Westcountry and the UK have to offer. Starting life as a small private party, Chagstock has now grown into a major fixture on the Westcountry festival circuit, selling out all 5,000 tickets for the last four years in succession.

Simon Ford Chagstock Festival organiser says, “After the incredible success of our 10th anniversary last year, we have once again given ourselves a very high bar to reach. However with another superb line up taking shape, and more exiting acts in the pipeline, we are confident we can bring you yet another fantastic Chagstock in 2017!”

Chagstock Festival is a Not For Profit Organisation, proud to support Devon Air Ambulance Trust and WaterAid.

Published on 16 February 2017 by Ben Robinson