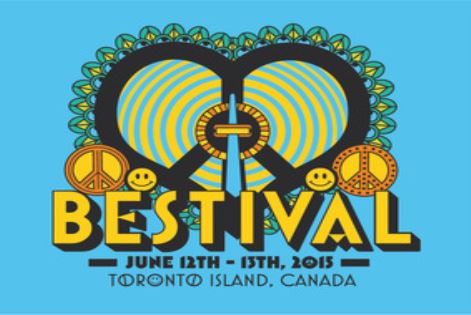 That's right, Bestival have announced their latest addition to the festival circuit, with an event in Toronto, Canada!

Rumours have been rife for just a little while that our uncontrollable urge to spread the Besti-love far and wide was about to burst out of the UK. So, we’re extremely excited to confirm that our trademark triumvirate of music, magic and mayhem will be heading to North America, landing in Toronto, Canada for the first ever Bestival abroad! So grab that marker pen and your diary and whack BESTIVAL in your best scrawl across June 12th- 13th 2015, because what we’ve got planned will be unmissable. Guaranteed.
Bestival UK has been going for strong for the past 12 years, winning a multitude of awards. The original boutique festival attracts 50,000 fans each year. Known for its creative vision and eclectic music including previous headliners Stevie Wonder, Florence & The Machine, The Cure, Kraftwerk and the world’s greatest electronic DJs, Bestival ensures the British summer will go with a bang!
Bestival curator Rob da Bank says: “We have waited 12 years to decide to launch another Bestival outside of the UK and our beloved Bestival, on the Isle of Wight, which has grown into one of the most important festivals in the global calendar. It took a really special city, and an even more exciting site, with Toronto and Toronto Island, to make us take the leap. So, the waiting is over and we are so excited to be launching in North America in June, with a classic Bestival line-up waiting to thrill, intrigue and party! I’d like to thank all our partners, friends, new and old, and supporters in Toronto, for making this happen. We cannot wait!”
Keeping our love affair with islands well and truly alive, Bestival Toronto will be set on Hanlan’s Point Beach, in the Toronto Islands, on the Shore of Lake Ontario. One of the most picturesque spots we could find in North America, the familiar sense of adventure and escapism that getting on a ferry and crossing water gives you, made it impossible to resist.
Staged in conjunction with Canadian promoters Embrace and SFX Entertainment, Toronto’s first edition of Bestival will showcase exactly why we’ve been at the forefront of festival culture for more than a decade. We’ll be bringing the full flavour of the UK’s only multi-award winning major independent festival across the Atlantic, so our North American cousins can drink deep from our admittedly eccentric English cup that overflows with amazing music, insane sideshows and magical happenings.
Expect to be enchanted by Josie da Bank’s much admired creative team whose brilliantly immersive experiences have the uncanny ability to transport you to untold new paradises. And prepare to be dazzled by Rob da Bank’s legendarily beyond eclectic booking policy that will create a distinctly singular UK/Canadian soundclash bringing together the most exciting music of all persuasions from brand new acts and legends alike. But whatever you do, don’t miss out on the first international Bestival; a truly unique experience that will open your eyes to all the possibilities of partying.
Keep your eyes peeled for line-up information coming soon. And in the meantime, head to www.bestival.ca and register for our ticket pre-sale.
Bestival – Toronto. Hanlan’s Point Beach Toronto Islands, Canada
12th-13th June 2015

Published on 16 February 2015 by Wayne Feltham