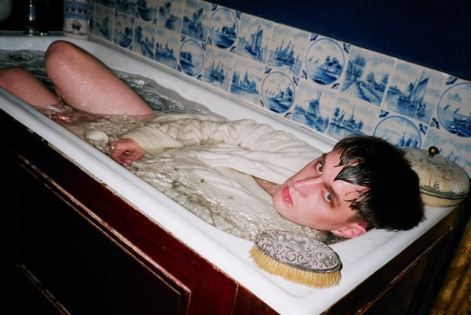 Patrick Wolf is celebrating 10 years in music this year with the release of his acoustic album ‘Sundark and Riverlight’.  The double album features acoustic reworks of tracks from Patrick’s 10 year catalogue – including ‘The Magic Position’, ‘The Libertine’, ‘Wind in The Wires’, ‘Hard Times’ and ‘Together’.
Since the first date at the The Old Vic Theatre, London in August the acoustic tour has taken Patrick to Australia which included 2 shows at the Sydney Opera House, travelling East to West Coast USA/Canada and then through Europe  - Germany, Switzerland, Italy the Netherlands, Iceland and France and back to the UK.
Says Patrick “I am so happy to take this ever evolving show into 2013, this feels like an adventure, not a tour!”
Patrick will be touring next year with Willemwiebe an amazing accordionist he met in Holland -  ‘im looking forward to hearing my string arrangements played on accordion and it brings such an exciting new energy to the songs’
Shows for 2013 take Patrick to Spain, Portugal, Finland, Latvia, Hungary, Czech Republic, Russia, Poland, Austria, Sweden, Norway, UK and alongside other UK shows a London show at the Queen Elizabeth Hall on 6th April 2013.
The global tour will continue through 2013.
Prior to next years touring Patrick’s next stop off in London will be on 5th December when he will be performing a half hour instore set at Rough Trade Records East, London and will be sticking around for a signing after the performance.

Published on 15 November 2012 by Wayne Feltham