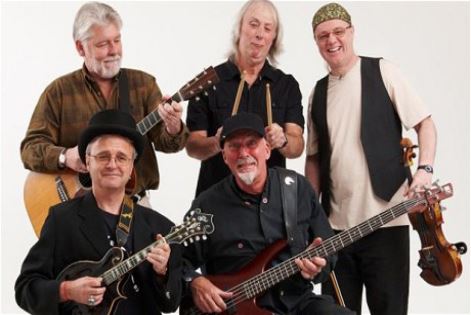 The thirty-date tour will start at The Roses Theatre, Tewkesbury on Friday 31 January and visit theatres in England, Wales and Scotland. The final concert of the tour will be at The Union Chapel in London on 9 March.
Hailed as the originators of British folk-rock music, Fairport Convention remains one of the most entertaining bands on the live music scene and their annual Winter Tour has become a much-loved cultural institution.
The band frequently introduces new material as well as drawing on its vast back catalogue so every year's Winter Tour features a unique programme of music. For 2014, Fairport's concerts will feature a mix of material from their most recent album as well as classics from the band's earlier repertoire. There will also be some brand new and previously unperformed songs destined for Fairport's next studio album.
The concerts will open with a short opening solo set from talented singer/songwriter Edwina Hayes. Edwina has worked with Jools Holland, Nanci Griffith and Roger McGuinn among others.
Formed in 1967's 'summer of love', Fairport Convention has been delighting audiences for over four decades. Hailed as the originators of British folk-rock music, the band is still as vibrant and inventive as ever.
"As a band, we always look to the future," says Simon Nicol who co-founded Fairport Convention in 1967. "After nearly fifty years on the road we still really look forward to getting out there to play in front of audiences. Although we regularly record new albums our first love remains live performance."
Fairport's long and fascinating history has been the subject of a major BBC television documentary and their annual music festival at Cropredy has featured on Sky Arts 1. Fairport has also won a coveted BBC Lifetime Achievement Award and Radio 2 listeners voted Fairport's groundbreaking album Liege & Lief 'The Most Influential Folk Album of All Time'.

Published on 15 October 2013 by Ben Robinson