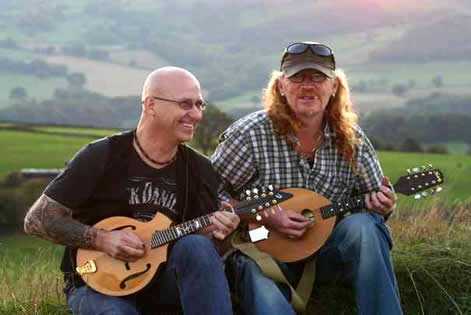 Simon Friend’s Seismic Survey – the acoustic side-project set up by the Levellers guitarist and songwriter – have been added to the line-up for Off the Tracks Spring Festival 2012.

Seismic Survey join Hawkwind, Wilko Johnson and the Dub Pistols for the event at Donington Park Farmhouse, Derbyshire, on May 25-27.
It follows the success of the successful Seismic Survey performance at Derby Assembly Rooms, at a show in aid of the MS Society.

A multi-instrumentalist singer-songwriter since school days Simon, from Brailsford, had been working as a roadie and occasional solo performer when the call came to join the Levellers.

He arrived in time to have writing input into their second album Levelling The Land. Released in 1991, its success was meteoric, reaching 14 in the UK album charts, going on to achieve platinum status and landing the band headlining slots on stages such as Glastonbury.  The Levellers have consolidated that success, still going strong and with a new album Static On the Airwaves due this year.

Simon explains: “I spent a lot of time in summer 2011 with Mick and we just got playing together again. It’s healthy to do something outside the band (Levellers) and have some fun, and we always said if it went well enough and we were happy musically it would be nice to do more of it.”

A fair proportion of the Seismic Survey set list is drawn from songs written by Simon and made famous by the Levellers, but in each case dismantled and reworked from the ground up.

He says: “You’ve got to keep the substance of the song but I didn’t want everyone to think that they have to perform it like a version of The Levellers.”

Paul Miro adds: “Simon wanted us to ignore existing versions of the songs, and completely revisit them, adding our own stamp. The combination of new ideas and reinterpretation of Simon's work is going to make for a unique experience for the audience. It's been amazing how easily the writing styles have gelled together.”

Simon says: “When I play solo gigs and someone gets up to play with me, I love that – that’s what music’s about. Also, working with Mick, I know he’ll keep me hard at it, which is good because I’m intrinsically lazy!”

The pair have an easy, affable understanding on and off stage which comes only from years of playing together. Mick recalls: “We met at Stansted Airport, on a steel girder working as steel deckers in the construction industry.

“We had a couple of mandolins and got gigs playing in pubs for beer after work. The tables would be awash with Guinness. We’d have to sneak back onto the site and sleep in the van, then at 8 o’clock in the morning we’d be back up on a beam 60 feet off the ground!”

For Levellers fans, the show offers a chance to see some of their favourites in a different arrangement; for lovers of acoustic music it’s an opportunity to witness four talented musicians each bringing something special to the mix. There are also contributions from the Doyle and Miro songbooks.

Already confirmed for the Off The Tracks Spring 2012 bill are the Warsaw Village Band, with many more artists still to be announced. And respected psytrance specialists Cabbage, from Leeds, will once again be taking over the Barn Stage.

The full line-up will include around 40 artists on two stages, as well as 70+ real ales, ciders and perries, excellent camping facilities and a great, family friendly atmosphere.

Published on 15 February 2012 by Wayne Feltham

Off The tracks Spring Festival 2012 Simon Friend (The Levellers)