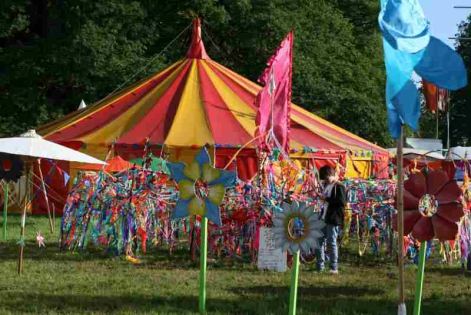 Despite selling way over it’s Earlybird discount ticket allocation in record time, Cornbury Festival director Hugh Phillimore is going to reopen the Earlybird ticket offer for four days over this weekend in response to fans who failed to get a ticket: ‘ I’ve now been persuaded by various of our regular supporters that because they somehow missed the deadline I should offer the Earlybird deal one more time,’ says Hugh: ‘So... in the spirit of Christmas goodwill  and just because it’s our 10th anniversary, we’ll make the Earlybird offer available for four days from 9am this Thursday (13th  December) through until midnight on Sunday (16th December). After that, that really is it! We’ve been totally overwhelmed by this year’s response for which we’re extremely grateful.’
2013 is the tenth Cornbury Festival and looks set to be the best ever with favourite acts from the past decade sharing the stage with specially requested newcomers in a Cornbury Greatest Hits-inspired line-up. Earlier in the year Hugh Phillimore asked Festival goers to vote for their favourite acts from the past nine Cornburys and Hugh will be booking as many of the top names as possible along with other acts on Cornbury-goers’ wish lists.
COUNTRY FAIR WITH A ROCK ‘N’ ROLL SOUNDTRACK
“It’s a great festival, with a great atmosphere and it’s well organised. It’s big enough to get world-class acts and small enough for people to enjoy them.”        Jools Holland, June 2012
Cornbury Festival is a one-of-a-kind eccentric musical carnival - a relaxed country fair where music-lovers share pint pots and glasses of champagne with superstars and morris dancers, toffs and rockers, crooners, farmers, and fashionistas.
Where else would you find acts as diverse as the 2012 four stage line-up of Elvis Costello and Pixie Lott, Jools Holland, Charlotte Church, Hugh Laurie and Alison Moyet, along with Will Young, the International Ukulele Club of Sonning Common and Oxfordshire’s finest indie bands?
NOT JUST ABOUT THE MUSIC
Festival-goers can also enjoy alternative entertainment in the Absolute Radio Comedy Tent; stretch their brains in the QI Emporium; dance ‘til they drop in the Disco Shed or just relax in the therapy and massage zone. And, as always, Cornbury 2013 will be offering a complete programme of workshops in the fantastic children’s area; a fun-filled fairground; a huge choice of food from the finest of festival caterers; as well as an exclusive VIP area, beautiful campsites, and above all a magical atmosphere.
TICKETS

To get  Cornbury Festival Earlybird tickets with discounts of £35 for an adult weekend camping ticket and a saving of £110 for a family of four (two adults and two children ages 3-12) visit the website www.cornburyfestival.com or call the ticket hotline  0844 338 0000 between 9am Thursday (13th  December) and midnight on Sunday (16th December). Full price tickets go on general release in the New Year.

Published on 14 December 2012 by Wayne Feltham