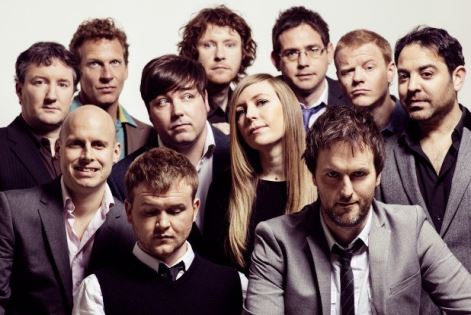 Having announced their intention to split after over a decade together, Bellowhead will play their final music festival appearance as part of Towersey Festival, in their home county of Oxfordshire, on Saturday 29 August 2015.

Since their formation in 2004, Bellowhead have sold out the Royal Albert Hall, released five increasingly lauded albums, and picked up over 20 BBC Radio 2 Folk Award nominations (including eight wins, five of which were for Best Live Act).

The 11-piece contemporary folk band has a long association with Towersey Festival, having last appeared there in 2012 following two electric performances so charged, the spirited audience broke the dancefloor!

Band co-founder and melodeon player John Spiers, who has visited the festival many times as a performer, retailer and camper, says: “With Bellowhead, I have played some of the most high-energy and blissful gigs at Towersey, there’s just something about a marquee in this rural setting towards the end of the Summer season that encourages care-free, energetic and blissed out dancing audiences. As a performer, that is a godsend!

“And now I’ll get to play the last festival gig Bellowhead ever do at Towersey, where else? Although that will be sad in one way, it will also be incredibly joyful.”