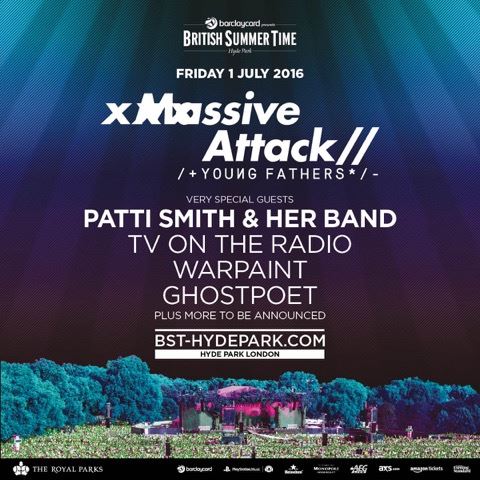 To help all their local fans to see the band this summer and prevent them from paying out to touts, they are supplying a fleet of coaches to give Bristolians a chance to see them perform at Barclaycard presents British Summer Time Hyde Park in London.

“We won’t be adding another date in Bristol this summer, but we don’t want people to pay touts over the odds. The unbelievable demand from Bristol meant that we looked for a way to help everyone to see us this summer. So we’re arranging for a fleet of buses to take people from Bristol to our show in London’s Hyde Park on Friday 1st July, at no extra charge. It’ll be great to have some of our fellow Bristolians up in London with us on July 1st.”

Joining Massive Attack will be the legendary singer-songwriter, poet, writer and activist Patti Smith. One of the most influential figures to come out of the late 70’s New York scene the ‘Punk Poet Laureate’ was presented Ordre des Arts et des Lettres by the French Ministry of Culture in 2005 and was inducted into the Rock And Roll Hall Of Fame two years later. Last year saw the 40th anniversary of her seminal album ‘Horses’, which is often cited as one of the best albums of all time. Her second memoir ‘M Train’ the follow up to the awards winning ‘Just Kids’ was released at the end of last year.

Mercury Prize winning Young Fathers are familiar to Massive Attack fans, the Edinburgh trio has supported the band on their recent European tour and will be joining them on stage at Hyde Park. First formed in 2008 the band came to prominence in 2014 when they won the Mercury Prize for their debut album ‘Dead’, their follow up ‘White Men Are Black Men Too’ was released in 2015 to universal critical acclaim.

TV on The Radio, one of the leaders of Brooklyn’s indie renaissance, is set to make their Hyde Park debut this summer. Hailed by the BBC as “one of the most compelling American rock and roll stories of the modern age”, the band will thrill with their distinct blend of propulsive art-rock and raw soul. TV on The Radio blasted back into prominence in 2014 with their fifth album Seeds, helmed by the band’s visionary producer and guitarist David Sitek.

Warpaint are a 4-piece band from California and their unique brand of intricate guitar lines, hypnotic vocals and driving post punk rhythms combine to create a truly unique sound. Since the release of their most recent album in 2014, they have been touring and exploring their own projects including a recently released solo album from the band’s bassist Jenny Lee Lindberg. Currently, the band is finishing up a new album which should come out later this year, and if we’re lucky, they will give Hyde Park a taste of it.

Following his emergence and the Mercury-nominated debut Peanut Butter & Melancholy Jam in 2011, London-based Ghostpoet has marked his own path. Propelled by the sonic illuminations of his third, and once again Mercury-nominated album, 2015’s Shedding Skin – it is an ambitious journey canvassing widespread praise that saw The Times hailing, “its blend of artistic vision, tales of everyday struggle and a broad, atmospheric sound…”

Barclaycard presents British Summer Time Hyde Park hits its fourth year in 2016, firmly established as the essential London summer event.  Already announced for July 2nd are Florence + The Machine and Kendrick Lamar, July 9th headliners are Take That, bringing their full live experience to Hyde Park for the very first time.  And on July 8th, Mumford & Sons will headline with special guests Alabama Shakes and Wolf Alice. Plus the legendary Carole King will perform her album ‘Tapestry’ in full on 3rd July, with Don Henley and Louise Goffin supporting. Lastly Stevie Wonder will perform his ‘Songs In The Key Of Life’ album on 10th July – with Pharrell Williams amongst those supporting.