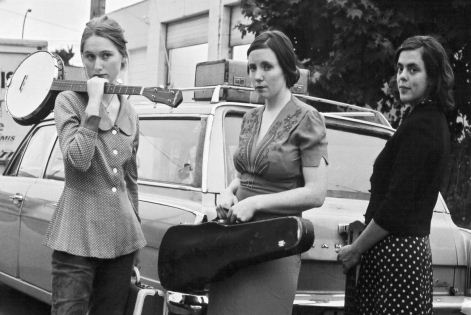 Canadian all female group The Be Good Tanyas has been announced as the final headline act for this year’s Shrewsbury Folk Festival (August 23 to 26).

The band – which recently sold out the majority of dates on a short UK tour – will perform on the final afternoon of the festival at the town’s West Mid Showground on Monday August 26.
Their music mixes deep country, early American folk, old time blues and gospel, and the Vancouver based trio of Frazey Ford, Trish Klein and Samantha Parton have been favourites of the roots music scene since they got together over a decade ago, capturing the hearts of fans and critics alike.
They are a welcome addition to an already strong line up that includes the only UK appearance for American band The Carolina Chocolate Drops and a joint performance from the festival’s two patrons Oysterband’s John Jones and Steve Knightley from Show of Hands.
Two more exclusives to Shrewsbury are Bright Phoebus sings Tom Waits and a very special Heidi Talbot & guests concert.
Bright Phoebus sings Tom Waits, a tribute to the singer, will feature a house band of Jon Boden, Martin Simpson, Sam Sweeney, Andy Cutting and Andy Seward along with Fay Hield, Roy Bailey, Neil McSweeney, Rowan Rheingans, Jess Arrowsmith, James Fagan, Nancy Kerr, Sharon Krauss and Rob Harbron.
Heidi Talbot will invite special guests including Eddi Reader, Boo Hewerdine, and Tim O’Brien to join her for her Sunday appearance with her band including James Mackintosh, Ewan Vernal, Andy Cutting, Michael McGoldrick, Ian Carr and John McCusker.
Also performing will be the Afro Celt Sound System, Oysterband, Capercaillie, Nic Jones, Eddi Reader, Tim O’Brien, Fay Hield & the Hurricane Party, Martyn Joseph, Nancy Kerr & James Fagan, Jez Lowe, ColvinQuarmby, Melrose Quartet, Something Nasty in the Woodshed, Keith Donnelly, Jess & Richard Arrowsmith, The Wilsons and Elbow Jane.
Jim Moray will lead a band of performers, including a special guest, in the 2013 Folk Slam finale in Marquee 2.
Some of the leading lights in the young folk movement will also head to Shrewsbury this year. They include Sam Carter, Lady Maisery, BBC Folk Award winner Lucy Ward, Blue Rose Code, Luke Jackson, Ursula Holden Gill, Madeleine Vaughan, Moore Moss & Rutter, James Riley and Lori Watson and the Rule of Three.
Nidi d’Arac, a group from Southern Italy who blend rural tradition with rock, electronica and beats, are on the list of international performers. Randolph Matthews & Byron Johnston will bring their fusion of Spanish acoustic guitar and African soul to the festival.
American singer songwriter Mark Erelli, who featured in the festival’s Darwin Song Project in 2009, makes a welcome return to perform solo and with his bluegrass band Barnstar. Another first for the UK will be an appearance by a unique Nashville based act Doyle & Debbie who offer a very special late night show.
Festival Director Alan Surtees said: “I am very pleased that The Be Good Tanyas will be one of our Monday headliners. I know that not only will their fans be pleased to have them here but they will delight a whole new audience.
“They are a welcome addition to an already very strong line up which offers many performances that you won’t be able to see at any other festival.”
The event has five music venues, a dance tent, dozens of workshops, a children's festival, Refolkus - a dedicated youth programme for 12 to 25-year-olds, on-site camping, a craft fair and food village. The festival is located on the fringe of Shrewsbury, with its medieval town centre just a short walk away.