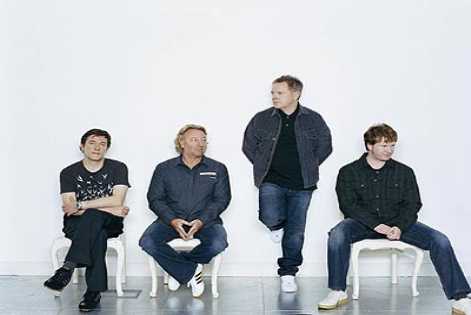 The excitement never stops at Bestival HQ! Following our first line-up announcement, which included the amazing Sigur Rós, The xx, Two Door Cinema Club, Justice, Hot Chip, 2manydjs, Annie Mac Presents and loads more, plus the acts that have been announced on Twitter in the last week, we’re beside ourselves with joy to be able to let you know just who our fantastic Saturday night headliner is and we’ve got even more tasty treats to boot!
Rob da Bank says: “So I've got Blue Monday blaring out of the Bestival HQ office speakers as we unveil our iconic Saturday night headliner New Order. It doesn't get better than that… but it does! True Faith, Bizarre Love Triangle, Fine Time, Regret - so many amazing records i grew up listening to and still listen to now and they still sound immense, pioneering, legendary. See you down the front!”
One of the UKs most enduring bands, we are truly delighted that our Saturday night headliner will be New Order! Since the band’s reformation in August last year, with Gillian Gilbert back among their ranks, interest in the band has been at fever pitch so it’s an absolute coup that they’re coming to Robin Hill to play a headline set at Bestival! With an armoury of anthems stretching back three decades, New Order live is an essential experience and one that we can’t wait to share with you all!
Not only have we got such a glorious headliner for you but we also have live appearances from Friendly Fires who will be unleashing their trademark live spectacular in their own inimitably vibrant and widescreen way, psychedelic electro-rockers Death in Vegas, super-hot eclectic art-pop quartet Django Django, the brooding and brilliant Daughter, rave horn aficionado Drums of Death and the anthemic indie-dance of Zulu Winter.
We’re extremely excited to be welcoming superfly LA beats stable Brainfeeder who will be presenting leftfield loops from Thundercat, The Gaslamp Killer, Teebs, Lapalux, Jeremiah Jae and DJ Kutmah. Plus we’ve got plenty more DJs to keep your feet moving long into the night, including a sweet shop smash and grab with Doctor P, breakdown madness from Pearson Sound, Israeli Dubstepper Borgore and one-man orchestra Flux Pavilion. Plus there will be stark techno from Max Cooper, bass chaos from Gemini, slow burning jams from Krystal Klear, organic electro from Pangaea, soulful sinewave action from Pariah, upfront rave action from Billy Daniel Bunter, woofer-worrying mayhem from Trolley Snatcha, drum magic from Blawan, Zen riddims from KOAN Sound and the twin bliss of Warm & Electric Minds.
We’ve delved even deeper into the Ambient Forest this year and are very excited to be presenting a brand new performance stage: the Amphitheatre. Nestled under a canopy of trees, this beautiful spot will be home to a host of eclectic treats, from live film scores, to comedy sketch shows, to theatre and poetry.
In the daytime we’ll be showcasing a vast array of the very best spoken word maestros in Scroobius Pip’s Lizard Lounge sessions. We’ve also got some seriously funny sketch groups unleashing their hilarity for our chortling pleasure. In Max and Ivan are Holmes and Watson, history’s greatest detective tackles Chicago’s mobster underworld in this thrilling escapade! Next up are The Unexpected, the creators of the hugely popular YouTube sensation ‘Gap Yah’. And then there’s Four Screws Loose: officially the tallest (not to mention the sexiest) sketch comedy group on the circuit!
In the theatrical offerings, we have the delightful Owdyado Theatre, presenting ‘About A Bench’, a funny, surreal and playful show of ten stories taking place on a park bench. Then newcomers Soundbites will be bringing some of the most hotly tipped theatre makers and musicians face to face to create new short plays that feature live music on stage. Kinda like a live music video. But better. And for mind expanding musings, don’t miss our series of talks from the mighty RSA, who will be presenting ideas and thoughts from some of the leading enlightened thinkers of our time.
As night falls, we’ll be turning to the silver screen. In a first for Bestival, we’ll be teaming up leading DJs and musicians with a handpicked selection of your favourite films, to offer some brilliantly unique live score cinematic collaborations. Rob da Bank will be leading the way with an unmissable rescoring of the 1930s King Kong!
And that’s not all that’s going on in the Ambient Forest. Back by popular demand, you can start your day in a secluded clearing in the woods, with a very special meditation or yoga session, presented by leading experts, the David Lynch Foundation. And if you are wandering around after dark, look out for the extraordinarily talented interactive theatre company Gideon Reeling, who’ll be popping up along the trails when you least expect it! Already firm favourites at Camp Bestival, prepare to be enchanted, surprised, enlightened and bewildered by your assortment of encounters with this fabulous gang.
If you like the sound of the Ambient forest then you might just like The Wild Copse, since we’ve announced it, tickets have been selling like the proverbial hot cakes, so if you fancy a bit of a luxury Bestival experience, you’re going to have to get in there quick.

Published on 14 February 2012 by Ben Robinson