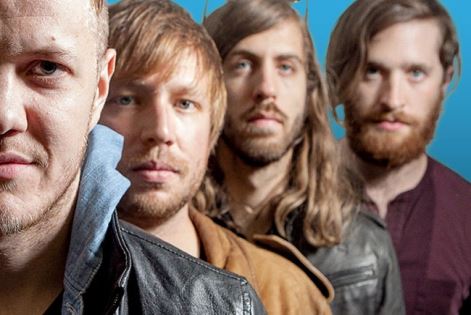 T in the Park 2014 got off to a scorching start today with the temperatures both on- and offstage soaring sky-high.

Setting an early pace on the Radio 1 Stage was Foxes, the Southampton-born pop diva known to her mum as Louisa Rose Allen. Ahead of a busy autumn – a European tour with Pharrell, a hush-hush role on the upcoming series of Doctor Who – she was the perfect example of the T star of tomorrow: a buzzed-about artist getting a big-stage leg-up, and leaving Scotland with the enthusiastic applause ringing in her ears.
As the happy crowds toasted in the sunshine, there was another toast on the Main Stage. Imagine Dragons, returning to T after a triumphant debut last year, were a T-time tea-time hit. And forewarned is forearmed: having been here a year ago, the Las Vegas band knew exactly the kind of thing that sets the heather on fire at Balado. They played a barnstorming cover of The Proclaimers’ I’m Gonna Be (500 Miles). Job done.
Into a glorious early evening, and the thrills kept coming. Ed Sheeran has been to T before, but only as a guest of Snow Patrol. His long-awaited full debut at the festival was one reason for the rapturous reception afforded the red-hot troubadour; the brilliant, singalong songs from his + and x albums was the other.
This was a masterclass in crowd-pleasing entertainment from the one-man-and-his guitar phenomenon, with Sheeran artfully co-opting the T-patented “here we… here we… here we f–ing go” chant into a chorus in his set. Upcoming single Don’t was a punchy anthem-in-waiting. Album track I’m A Mess, receiving its big-gig debut, was his emotional, confessional songwriting at its best.
There was more emotion in the King Tut’s tent. Manic Street Preachers were pumping out the hits from their storied back catalogue, sounding as punchy as they ever did on their multiple previous appearances at T in the Park. PCP, You Stole The Sun From My Heart, Everything Must Go – the Welshmen were on unstoppable, hit-playing form.
All that said and no disrespect, there was only one band to whom the opening day of T 2014 belonged. With a full moon hanging poetically in the sky, Biffy Clyro stormed the Main Stage, and stormed the hearts of the festival masses. It was a record-breaking tenth T appearance for the Ayrshire trio, and there could have been no better band to close Friday. Different People, That Golden Rule, The Captain – rousingly sung belters all, and that was only the first three songs. Little wonder that there were tears aplenty down the front row. T’s favourite sons had come home.
By the time they finished close to midnight – a bagpiper for Stingin’ Belle, fireworks for Mountains – Biffy Clyro had done the unthinkable: knocked their previous nine performances out of the Park. Simply astonishing, simply Scotland’s greatest rock band. ’Mon the Biff.

T in the Park 2014 Imagine Dragons