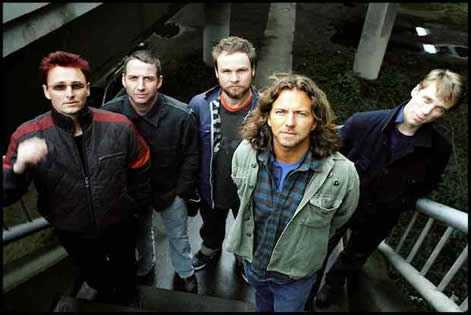 The Isle of Wight Festival completes a trio of legendary American headliners, with one of the world's most influential bands Pearl Jam, who will take to the main stage in a UK Festival exclusive.

Also added to the bill are The Darkness headlining the Big Top on Sunday, Feeder opening the Main Stage on Friday while Professor Green, Wretch 32, Loick Essien and Clement Marfo & The Frontline all play the Big Top on Saturday 23rd June.
Pearl Jam continue to combine guitar-heavy Led Zeppelin-influenced songs with Eddie Vedder's charismatic impassioned vocals. This will be a UK Festival exclusive and so make sure you’re there to witness what will be an unbelievable performance!
The truly eclectic line up will see British glam rock band The Darkness take the headline slot in the Big Top on Sunday 24th June closing the Festival weekend. The band, who reformed this year are renowned for their elaborate stage performances, so expect a show you won’t forget in a hurry.
Since they started releasing records fifteen years ago, Feeder have never been far from the charts or strangers to the stage. After a crowd pleasing performance in 2008 the band will open the Festival’s main stage on Friday 22nd June.
On Saturday 23rd June, Hackney boy Professor Green will bring his slick rap lyrics to the atmospheric Big Top. Joining the Big Top bill is one of the biggest music success stories of 2011; Wretch 32. Sure to wow the crowd with tunes such as the chart topping, 'Don’t Go’, Wretch 32 is the perfect addition to the Isle of Wight Festival line up.
Loick Essien came to music almost by accident and now brings his sophisticated, smooth, accessible British urban soul style to the Big Top. Next up is Clement Marfo & The Frontline, whose inimitable sound comes from their deft ability to fuse hip-hop, grime and rock and pop in a brilliantly idiosyncratic fashion.
John Giddings, the Festival’s promoter, says, 'Pearl Jam completes our American trilogy for this year. They have been on our wish list for a long time and we are proud for them to come to the island for the first time. Meanwhile we intend to provide plenty of other entertainment in the Big Top and Garden Stage starting with contemporary urban entertainment of Professor Green and Wretch 32.’

Published on 12 December 2011 by Wayne Feltham