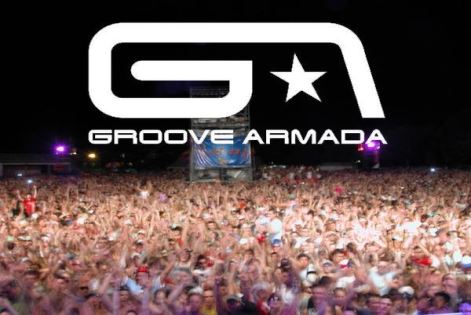 The Beat-Herder Festival is delighted to announce new acts for 2013, including newly confirmed headliners Groove Armada, who join previously announced headliners Jimmy Cliff and Booka Shade in Lancashire this July.

Unquestionably one of the UK’s finest and most enduring dance music exports, Groove Armada never cease to evolve and surprise. Emerging from the 90s underground, they swiftly rose to top the charts, becoming festival mainstays with their multi-instrumental monumental sets. Having recently reconnected with their acid house roots through a critically acclaimed EP released on underground house label Hypercolour, Tom and Andy are certain to deliver an incendiary headline set that will combine their impressive DJ heritage with 10 years experience in big show production.
Joining them will be one of the biggest names in jungle, Roni Size and his long time cohort Dynamite MC, high octane party starter and BBC Radio 1 DJ Kissy Sell Out, rising teenage house duo Bondax, the ambient dub stars and genre blending Banco de Gaia, and hard hitting, bass heavy DJ/producer Feed Me, whose recent releases on Deadmau5’s Mau5trap label have been showcasing his versatility as an electronic artist and earning him critical acclaim.
Elsewhere, hotly tipped neo-psychedelic four-piece Temples, rousing folk rock group To Kill a King and London duo Public Service Broadcasting, who layer samples of old public information films and service announcements over banjo/guitar and drums, are confirmed to play in the new band tent, whose burgeoning line up already includes the likes of Dan Croll, George Ezra, TOY and Roosevelt.

Nabbing the coveted headline slot for The Working Men’s Club this year are Doctor and the Medics, the London based psychedelic rock band who emerged in the 80s with classic hits such as Spirit in the Sky.

Plus as with years gone by, there will be so much more than just music on offer. This year’s comedy offering comes from Manchester stand-up Justin Moorhouse, who is set to charm the crowds with his strong Northern sensibility and Phoenix Nights alumni Janice Connolly, best known for her middle aged housewife caricature Barbara Nice.
What to expect for 2013:
Built entirely and lovingly by hand over 12 months, Beat-herder is quite literally a world like no other. Nestled in a beautiful valley in the heart of Lancashire, the site encompasses rolling hills, stone circles, fire pits, a network of secret underground tunnels accessed through telephone boxes, a working men’s club (complete with a troupe of Bette Lynch esque ‘ladies’), 10 feet high wicker foxes, giant lizards made from hollowed out old fighter planes and dozens of stages and soundsystems – some where you least expect them.

At the heart of the site lies a copse known as the Toil Trees, inside which all manner of surprises and curiosities await. Winding through the trees is a built-to-scale, fully functioning Victorian Street housing a sweetshop, a record shop, an Irish pub, the Hotel California saloon bar and a 50 X 30 ft solid wood parish church complete with pews and altar, whose regular services are less about prayer and repentance and more about good times, disco and debauchery.

Venture deeper into the woods, past the vintage car converted into a DJ booth where anyone is welcome to come and spin vinyl, and the trees open up into a magical woodland clearing in which an impressive tulip lipped stage sits, and where DJs play day and night.

By building everything from the sign posts to the bars from scratch, incredible care is taken and an unrivalled attention to detail is paid, creating a true alternate reality where ‘beats and barminess’ are the only order of the day, for three blissful days. And with the Beat-Herder team having been plotting and scheming throughout the winter, watch this space for more details on two new areas and many more spectacular surprises to come.