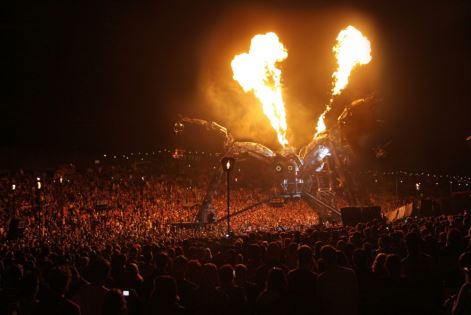 With exactly one month to go until BoomTown Fair returns, the festival has now sold out for the fifth year running and over 26,000 eagerly expectant residents are gearing up for four days of unadulterated escapism in the UKs maddest city!

For those without tickets there is a last chance saloon to get involved when the unclaimed deposit tickets go on resale at 7pm this Friday, 12th July… After searching high and low, Julian Marley has been announced as a very fitting replacement for Toots and the Maytals, and two top notch reggae super stars are confirmed as secret headliners for the newly discovered Lion’s Den temple! Other highlights to expect from BoomTown Fair include the full Arcadia Spectacular show, seven diverse districts to align with, more than 30 mini venues to be discovered and over 300 party-tastic musical acts on hand to provide the perfect soundtrack to a long weekend of fully immersive indulgence!
With tickets selling at a record speed for 2013, BoomTown Fair has now officially sold out. However, all is not lost for those who still wish to get their hands on one of the coveted resident passes to the ‘UKs Maddest City’, the unclaimed deposit tickets will go on re-sale this Friday (12th July) from 7pm via the BoomTown website, but be sure to get in there early as the amount is limited and expected to disappear at some pace!
In answer to Toots and the Maytals unexpectedly cancelling their European tour and no longer able to attend BoomTown, the town council have been beavering away to find a suitable replacement and are giddy with excitement to welcome Julian Marley to the Town Centre! Julian is the only son of Bob Marley to be born and raised in the UK and is a Grammy Award nominated, roots-reggae musician, singer-songwriter, producer and humanitarian in his own right. A selection of other acts to be joining Julian on the UK’s only reggae and ska focussed main stage are; Parov Stelar Band, Mad Caddies, Ozomatli, Arrested Development and The Neville Staple Band. There are also two extra special secret headliners for the Lion’s Den to be announced onsite who will be sharing the bill with already announced reggae legends; Gentlemen and the Revolution, Richie Spice, Lee Scratch Perry and Collie Buddz, plus many more!
Moving on from the mind-blowing line-up to the mind-blowing installations that BoomTown has to offer, fresh from the fields of Pilton is the mega beast of Arcadia, all set to fire up with the full Spectacular show (only seen at Glastonbury and BoomTown), which includes astounding aerial acrobatics, projection mapping, lasers and flame throwing pyrotechnical displays, dishing out a hefty dollop of shock and awe, it is the perfect opener for hours of uninterrupted high octane DJ sets from the likes of South Central, Calyx & Teebee, LTJ Buken, Slipmatt & Billy Daniel Bunter, DJ Zinc plus many more, including BoomTown’s very own Mayor! To get a sense of what to expect from Arcadia check out this video from Glastonbury 2013: http://www.youtube.com/watch?v=XDhNBF35fFw
With the city splitting into seven distinctly different and fully immersive districts, each with its own unique take on complete and utter madness, it is up to the BoomTown residents to choose which area they wish to align themselves with for the duration of the festival. Residents are encouraged to pick their fancy dress outfits around the district they ‘belong to’ and there will even be onsite elections for the post of Town Mayor.