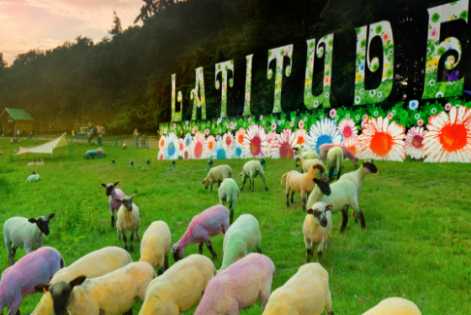 The week of Latitude is finally upon us! With only a day to go until the gates open for the UK's favourite multi-arts festival on Thursday 12th July.

Latitude Festival is almost ready to welcome in the crowds for what is shaping up to be yet another amazing festival. With a line-up featuring over 400 of the most exciting acts from the worlds of theatre, comedy, literature, cabaret, poetry, film, dance and fashion, as well as a fantastic live music bill including headliners Elbow, Bon Iver and Paul Weller, this could just be Latitude's best year yet!

Latitude has the great advantage of having one of the country's most beautiful festival settings in the stunning grounds of Henham Park. Organisers Festival Republic can report that the build is all going to plan and the site is looking fabulous, the Obelisk Arena is ready to ignite the excitement, The Word Arena stands proud at the top of the site, the sheep are having their hair done and the woods are alive with activity.

Despite the unseasonable rain we have been experiencing lately, the good news is that the sun looks set to make an appearance over the course of the weekend! Showers needn't hold festival goers back either, as there's plenty to do and see in a huge array of covered arenas and under the canopy of the trees.

The car parks are looking great at the moment and feel good underfoot, and the actual festival site is sandy and drains really well, so we're confident that a few showers will not cause disruption to this amazing event. Whilst Latitude does not anticipate any of the weather horror witnessed at other events recently, there is always the possibility of slight delays due to peak times and the weather so please ensure you use the Latitude Facebook page and official Twitter
(@LatitudeFest), where you can find regular updates of the car park situation every two hours on Thursday 12th July.

The Tour de Latitude has been a great hit with festival goers in its inaugural year. An environmentally friendly way to travel to the festival, whilst raising money for some worthy causes is a combination Latitude lovers have found appealing. The cyclists will be heading off from their chosen starting points on Thursday and we will be there to cheer them on and welcome them upon arrival.

Iain Banks is unable to visit Latitude this year due to unforeseen reasons, however new speakers will be Professor Brian Cox, Professor John Butterworth and interviewed by Robin Ince in the Literary Arena about the Higgs Boson particle. Summer Camp and Dan Avery have been announced for Noise of Art's Psychedelic show at Latitude on Friday night in the Film & Music Arena.  Rising boy girl duo, Summer Camp, combine Sixties influenced melodies with neo synthpop sounds. Signed to respected indie label Moshi Moshi, they've been earning deservedly rave reviews and selling-out London venues of late. Their live act and visual show promises to be Latitude highlight. DJ Daniel Avery is on everyone's lips right now. He's just been signed by Erol Alkan to his Phantasy label and is about to release the next Fabric mix LP. He's also been working with producer and DJ Justin Robertson, another Noise of Art regular. All of which makes him a perfect representative to connect today's club music to its psychedelic ancestry. Dan and Summer Camp join an already packed line-up of Psychedelic immersive club happenings on Friday in the Film & Music Arena.

There is a whole host of other exciting performances taking place on Thursday evening so be sure to get here early and kick the weekend festivities off to a great start. Top picks for the evening include the Aldeburgh Young Musicians Ensemble on The Waterfront Stage, 20 unbelievably talented young musicians from the East of England performing material that crosses musical boundaries from jazz to world music, all accompanied by stunning visuals and installations. Former Housemartin and Beautiful South main man Paul Heaton is rolling out two amazing shows in one evening with The 8th at the Film & Music Arena. Paul will be joined by a host of stars in this wonderful recollection of one of the longest songs ever written and The 8th will be followed by a performance of some of Paul's greatest hits for a thrilling journey through his back catalogue. For theatre fans, Lyric Hammersmith will present nabokov's Symphony in the Theatre Arena, an exciting fusion of theatrical narrative and live music. To round off day one of the festival with the first of many parties, why not drop in on Latitude favourite Dermot O' Leary. The DJ and TV presenter is bringing the Indie Disco from his BBC Radio 2 show to help keep crowds dancing long into the night! Sway to The Smiths, shuffle to The Shamen or sip cider with The Cure
fans In The Woods.

Not long now...See you in Suffolk!