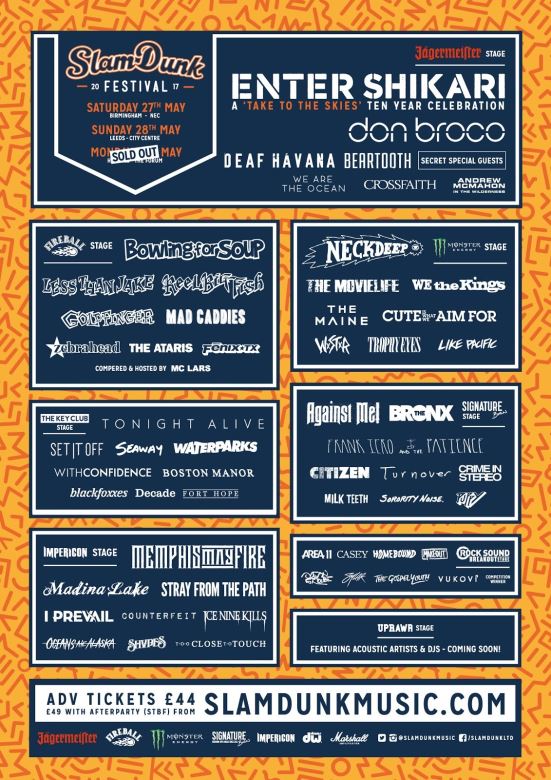 Slam Dunk Festival is thrilled to unveil the full stage splits for the most exciting multi-locational festival in the UK, set to travel through Birmingham, Leeds and Hatfield over the May Bank Holiday weekend!

For the most comprehensive lesson in pop-punk, the Monster Stage will be the place to catch Cute Is What We Aim For and We The Kings perform their debut albums in full, and will bring together stage headliners Neck Deep, pop-punk legends The Movielife, The Maine, WSTR, Trophy Eyes and Like Pacific.

This year’s Fireball Stage plays host to all things Ska. Compared by the one and only, MC Lars and headlined by Texan heavyweights Bowling For Soup, fan-favourites Less Than Jake, Reel Big Fish and Goldfinger will join Mad Caddies, Zebrahead, The Ataris and Fenix TX for the biggest ska-party of the year!

Playing homage to Slam Dunk Festival’s humble beginnings, the Key Club Stage is packed with some of the most exciting acts in contemporary rock music. Warming up the stage for headliners Tonight Alive will be UK natives Boston Manor, Black Foxxes, Decade and Fort Hope before a global invasion of With Confidence, Waterparks, Seaway and Set It Off storms the stage.

Punk and everything in between can be found on the Signature Brew Stage as Against Me! and The Bronx lead the charge on Slam Dunk Festival. Crime In Stereo are set to show acts and audience goers alike how it’s done, as Frank Iero & The Patience, Citizen, Turnover, Milk Teeth, Sorority Noise and Puppy all make their Slam Dunk debuts.

Known for bringing the heavy, the Impericon stage has all bases covered this year with American goliaths Memphis May Fire and the monumental Stray From The Path. In addition to these incredible heavyweights, The Impericon Stage also welcomes the return of Madina Lake and Shvpes, and I Prevail, Ice Nine Kills and Oceans Ate Alaska will storm on behalf of Fearless Records. Counterfeit and Too Close To Touch will be appearing here at Slam Dunk Festival for the first time ever.

The Uprawr Stage will return to Slam Dunk with a whole host of exciting acoustic acts and party-starting DJs. Whether you’re at Birmingham on May 27th, Leeds on May 28th or Hatfield on May 29th, Slam Dunk Festival 2017 will be the ultimate alternative party of the summer.