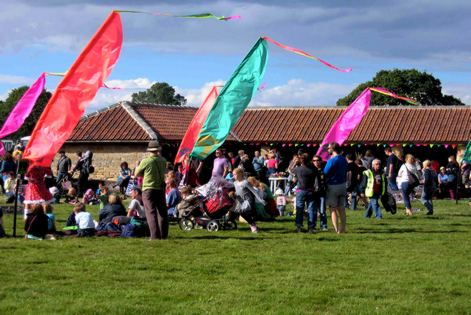 After abandoning one too many festivals early because they weren't having the time they hoped for, organisers Kate and Oliver Jones decided if they couldn't find the perfect festival for them and their three children, they were going to have to put one on themselves and thus Deer Shed Festival in North Yorkshire was born in 2010. The aim? A festival full of the unexpected but those of the delightful variety like discovering a new found passion for graffiti tagging or dancing with your six year old, not the unpleasant surprises like filthy toilets.

Somewhere to get away from the day to day grind and remember how great it is to paint, play, make things, sing, dance and have fun with your loved ones whether they're six months or 60 years old. Somewhere to come away from feeling revitalised and refreshed, not wiped out and weary.

In addition to an awesome line-up of music, the Deer Shed Festival offers a programme that includes everything from cabaret and comedy to sports to arts and crafts:

The Friday night cabaret show is curated this year by the Greentop Circus who will also be on hand over the weekend to teach circus skills. Comedy, which is all PG-rated, will be supplied by Chortle Award winners Pappy's, James Campbell, Jon Reed and Andrew Clover from BBC2's My Almost Famous Family.

The Deer Shed team are seriously considering attempting to break the world record for the most people simultaneously playing swingball this year. Failing that they'll have organised football and softball with qualified coaches and over a quarter of the campsite space will be given over to a field full of hula hoops, space hoppers, building barrels and that ridiculous amount of swingballs to keep everyone occupied when the main arena isn't open. They'll be recreating a mini-seaside too for those who enjoy some bucket and spade action.

The arts endeavours in the arena will include a doodle wall, paintball art, graffiti workshops and ukulele lessons. Craft activities include making lots of different things out of lots of different stuff – guitars out of cardboard, mobiles out of CDs, masks out of of milk cartons, gardens out of plasticine, badges out of...well badges and models out of anything and everything you can lay your hands on.

For the times when festival goers simply want to sit back and relax instead of getting involved, there's cartoons and family films to watch, storytelling, an artist blacksmith in residence to whip up pieces of bespoke jewellery, a cocktail bar and high quality food to tickle all types of taste-buds.

It's not rocket science (though the festival has a Sky At Night theme in honour of headliners I Am Kloot so there may be some rocket happenings lined up), but the Deer Shed team have put some serious thought into what everyone wants from a festival.

Superb, great, amazing, fantastic, wonderful...the plaudits were high. Nominated for Best New Festival at the UK Festival Awards 2010, Deer Shed struck a chord instantly with festival goers that don't want to pay a fortune for the privilege. Back by popular demand for its second year in 2011, with an increased capacity to cater for all those that missed out last year, the Deer Shed Festival is a true family-friendly weekend.