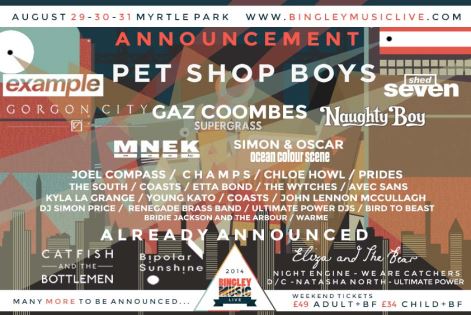 Yorkshire music festival Bingley Music Live may just have secured the festival coup of 2014. The 16,000 capacity, 3 day festival in Yorkshire has added the legendary music duo Pet Shop Boys, who have sold over 50 million records worldwide, as one of

Headlining the other nights will be chart topping hip-hop artist Example and Yorkshire heroes Shed Seven in their home county as they approach their 25th anniversary. While three times Brit Award winning Gaz Coombes of Supergrass will be appearing as a Special Guest.
This year, Bingley Music Live has artists from every genre and promises the most complete lineup in its history.
Other highlights include Gorgon City and MNEK (fresh from their joint top five smash ‘Ready For Your Love’), the phenomenal Naughty Boy and festival favourites Simon and Oscar from Ocean Colour Scene.
Fast rising Singer songwriters Chloe Howl and John Lennon McCullagh will join the lineup. Chloe was nominated in the BBC Sound of 2014 and Brit Awards Critics Choice, while John was signed to the new 359 Music label by Alan McGee, the man responsible for Oasis and 2013 headliners Primal Scream.
The Pet Shop Boys are the most successful UK electronic act and duo of all time, with a career spanning over 30 years. They have clocked up no less than 42 Top 30 singles and 22 Top 10 UK singles hits.
The six times Grammy nominees have won three Brit Awards, including the 2009 award for outstanding Contribution to Music Award. The Ivor Novello Outstanding Contribution to Pop Music and the 2013 Q Award for Outstanding Contribution to Music are just two more of the band’s many accolades.
Hits include ‘West End Girls’ (voted Song of the Decade by six million BBC listeners), ‘It’s a Sin’, ‘Go West’, ‘Always on My Mind’, ‘Rent’, ‘Opportunities (Let’s Make Lots of Money)’ and the Dusty Springfield accompanied classic, ‘What Have I Done to Deserve This?’.
Example returns to BML after first appearing in 2010 and is the first artist to ever return as a headliner. Elliot Gleave (his real name) hit the big time with his second album 'Won't Go Quietly' which peaked at number 4 on the UK album charts. This saw two top 10 singles - 'Won't Go Quietly' and 'Kickstarts'.
Yorkshire’s favourite sons, Shed Seven, tore up the Britpop scene in the mid-90s and amassed no less than fifteen Top 40 singles and four Top 40 albums, acquiring a loyal and dedicated fanbase along the way. In 1996, singer Rik Witter and the band had more hits than any other act that year in the UK! Anthems ‘Getting Better’, ‘Going For Gold’ and ‘Chasing Rainbows’ have stood the test of time.
The very best of new talent is represented with acts like Bipolar Sunshine, Catfish and the Bottlemen, Eliza and the Bear, The Wytches and We are Catchers, recently signed to the Arctic Monkeys label.
Night Engine will put in an appearance, having supported the Kaiser Chiefs and The 1975 last year, enjoying comparisons to David Bowie. As will D/C and Champs. Etta Bond, the first signing to hit-maker Labrinth’s new Odd Child label, is yet another of the artists set to do business in 2014 alongside Joel Compass. Notorious DJ team Ultimate Power and respected music journalist and DJ Simon Price will be DJing during some of the main stage changeovers. Many more artists will be released in the coming weeks.
This year's event is to be held on 29th, 30th and 31 August. It’s the North's last big party of the summer and is incredible value for money at £49 plus booking fee for the three-day festival – over four times cheaper than some of the region’s festivals. Previous acts have included Nile Rodgers and Chic, Primal Scream, Jake Bugg, Calvin Harris, Nero, Editors, Cribs, DJ Fresh and Doves.