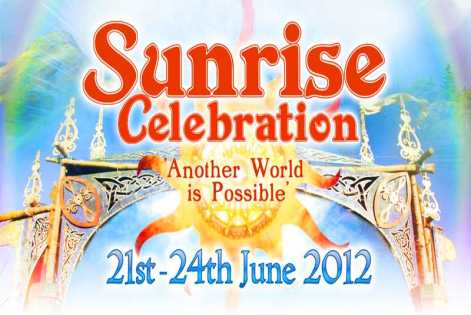 Sunrise 2012 is to be headlined this year by epic super group The Imagined Village, one of the most exciting and unusual collaborations of the last decade. The all star lineup features; Waterson Carthy legends Martin and his daughter Eliza Carthy, Simon Emmerson and Johnny Kalsi of Afrocelt Soundsystem and Transglobal Underground, and Andy Gangadeen and Simon Richmond of cult group The Bays and Jackie Oates, winner of BBC Folk Award for best newcomer.

“Sunrise is one of the festivals we've always wanted to play. Loads of the band and crew have been as paying punters for the vibe, music, ethics and general all round goodness. For me it's personal!” Said Simon Emmerson of Imagined Village.

Legendry dance act The Egg, will be returning to top the bill with their unforgettable show, alondside Dub and Reggae sound system Mungos Hi Fi feat. the awesome Soom T and Mr. Williamz for a serious Sunrise bassline experience.

Prolific genius Gaudi, with his dubby breaks, big basslines and spacious soundscapes will be playing the Solar Dance stage along with leading star at Twisted Records, Benji Vaughan, whose collaborations include Younger Brother with Simon Posford, and Banco de Gaia who will be joining Sunrise fresh of the back of a new album “Songs from the Silk Road” released in February.

To inspire throughout the festival there will be a host of some of the UK's leading alternative thinkers giving talks and workshops that will blow the mind and ground the feet into action:
Peter Owen Jones (BBCs Extreme Pilgrim/Around the World in 80 Faiths), Sheikh Ahmad Dede (Sufi Whirling Master) and Leo Rutherford (UK Shamanism pioneer and author) to name a few.

“Sunrise is a unique blend of green philosophy and underground ideologies all given voice and held within a heart felt friendly environment. That’s what makes the vibe so special and demonstrates ‘another world is possible’”, said Dan “A tantalising mix of unique musical collaborations, twisted circus sounds and foot stomping revelry, with lyrical genius and world-shifting musical experiences amidst hidden venues and thriving hives of inspiration and foolery!” Said Dan Hurring, festival organiser.

The festival in its 7th year and has moved to the solstice weekend for 2012 only! This is the weekend normally taken by Glastonbury Festival.

“Anyone looking for a festival to fill the Glastonbury-shaped hole left by Michael Eavis's decision to let his land lie fallow and lend his loos to London in 2012 need look no further than nearby Bruton, in Somerset”, said Steve Hawkes, BBC News Online.