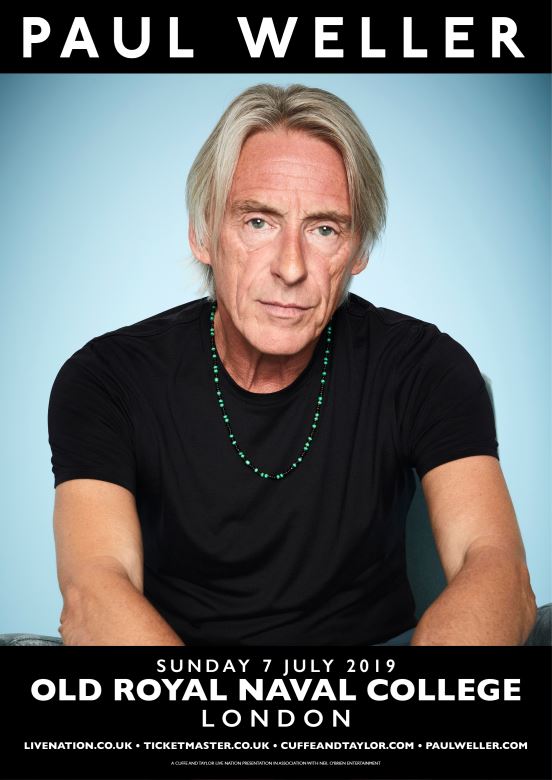 Paul Weller, “One of the most revered music writers and performers of the last 30 years” (BBC), released his critically acclaimed 14th studio album True Meanings in September, which shot straight to No.2 in the UK album charts. The Modfather and former Jam and Style Council icon remains at the very top of his game, with his recent sold-out shows at London’s Royal Festival Hall hailed as “a night of genuine musical genius.” (GQ)

“It’s always good to play in London and we are looking forward to what will be a great gig.” said Paul Weller.

Peter Taylor, director and concert promoter at Cuffe & Taylor, added: “What a show this will be! We can’t wait to welcome Paul Weller to Greenwich Music Time. He gives his live shows his all and the audience really feel it. It’ll be a special one.”

The Greenwich Music Time series of concerts, which will take place 1-7 July 2019, celebrate a 5th anniversary in 2019. The shows are set amongst the city’s most impressive backdrop. Framed by the pillars of the stunning Old Royal Naval College, the Thames and the London city skyline are viewable against the stage to complete the ultimate concert experience in London. It’s a truly special venue offering a breathtaking setting like no other.

Tom Jones, Noel Gallagher, Il Divo, The Jacksons, Seal, Joe Bonamassa, 10CC and Sir Cliff Richard have all performed as part of the series. More announcements for next year’s line up will follow soon.

Published on 10 December 2018 by Ben Robinson