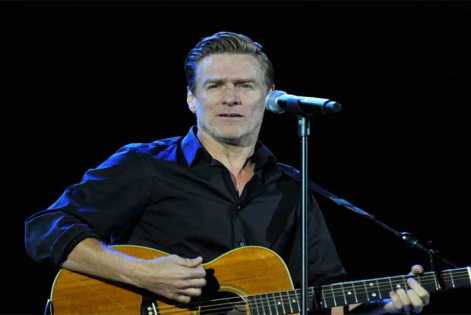 This new spin on his classic hits has been met with rave reviews from critics and fans alike:

"Armed only with a small array of acoustic guitars Adams packed enthusiastic fans — sometimes a bit too enthusiastic — into the intimate Sheldon for a great night of music and insight." St. Louis Post Dispatch

"They sang along with the ever-so-familiar choruses, filled in vocal gaps he left for them, clapped the missing drum parts, hummed the missing solos, and roared their approval after every offering, right up to a long and hearty standing ovation after 'Run To You'." Toronto Star

"Threading hits with new material, the soundtrack-singer and celebrity-portrait shooter (the stage design consisted of six towering lighting stands), succeeded in transferring his emotional ballads and crafted, sing-along rock to a mature setting." Globe and Mail.

As Canada's best-known ambassador, Bryan Adams has spent the last three decades making music history. He has sold over 65 million records, toured six continents and achieved #1 status in over 40 countries around the world. With hits like, "Cuts Like A Knife", "Summer of '69", "Kids Wanna Rock", "Can't Stop This Thing We've Started", "(Everything I Do) I Do It For You", "Open Road" and most recently "Thought I'd Seen Everything", Adams status as one of the great songwriter's of our time, has been solidified.

For the past year Adams has been performing his full band arena rock show to sold out audiences in Europe and Canada in celebration of the 20th anniversary of the release of his multi-platinum, award winning album "Waking Up the Neighbours".  These concerts have been  interspersed with his Bare Bones show in select cities.

He is a Companion of the Order of Canada and has been inducted into the Canadian Music Hall of Fame and has a Star on the Hollywood Walk of Fame. Bryan has been nominated for Academy Awards, Golden Globes and Grammy's and his handprint has been added to the Wembley Square of Fame in celebration of his 25th show at the famed stadium.  In his home country, Bryan has been recognized at the Juno Awards with the Allan Waters' Humanitarian Award and a week later he received the prestigious Governor General's Performing Arts Award for Lifetime Artistic Achievement.

Bryan's outstanding live concerts have established him as one of the world's best rock singers, performing over 120 concerts a year. The show at the Royal Albert Hall provides a rare opportunity for fans to see Adams as they've not seen him before.

Published on 10 October 2012 by Wayne Feltham