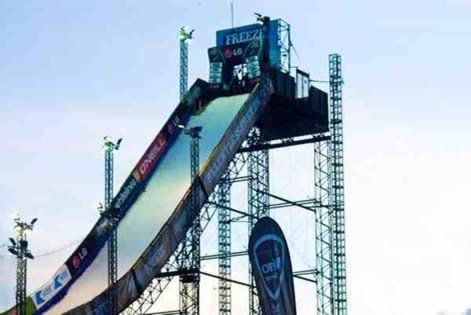 With Freeze only 8 weeks away it's time to don your beanies and get ready for the most killer line-up to date.

If the likes of Groove Armada and The Streets aren't enough though we are pleased to announce the entire 'Energy Sessions Stage sponsored by Relentless Energy Drink' will be released next Tuesday at 2pm!  It’s looking hot so far so watch out for this...
Sport schedules are also close to completion - the Battle of Britain event will take place on the Friday followed by the International Freestyle Ski later in the evening - perfect for late, after work arrivals. Saturday will see the return of the Snowboard World Cup as well as the crowd favourite USA vs Europe showdown in both Ski and Snowboard.
The two 2010 champions will return in October to defend their titles. FIS world Cup winner Marko Grilc from Slovenia and Freestyle Ski Big Air winner Jacob Wester of Sweden are amped to come and attempt to retain the honours.
Elsewhere, Billy Morgan will also defend his Whitelines Battle Of Britain victory, whole commiserations go to Paddy Graham who will not ride due to rehab after surgery. He will be in attendance though so look out for the ever popular freestyling Brit. With Paddy’s absence all eyes will be on X Games medallist Brit, James Woods, who has never let the Freeze crowd down.
Athletes Confirmed:
FIS Snowboard World Cup:
Marko Grilc
Seppe Smits
Arthur Longo
Ulrich Badertscher
Int Ski Big Air:
Jacob Wester
Colby West
Gus Kenworthy
John Spriggs
Matt Walker

Published on 10 September 2011 by Wayne Feltham