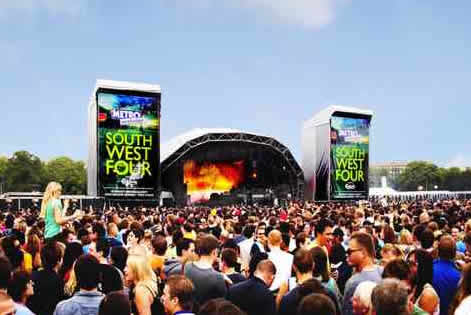 We’re delighted to announce that South West Four Saturday is completely SOLD OUT! THAT’S IT FOLKS! Underworld, John Digweed, Sven Vath, Above & Beyond and more will be arriving this month on Clapham Common.

Demand for tickets has been nothing short of incredible and we would like to thank everyone who has helped SW4 Saturday sell out three weeks in advance. All that remains now are the tickets to day two at SW4, with these now down to the final allocation and expected to sell out imminently.
Headlining day two of South West Four will be the musical juggernaut that is Pendulum, playing their only London show of the year. They will be joined by dubstep powerhouse Magnetic Man, with further main stage performances coming courtesy of Annie Mac, Digital Soundboy Soundsystem, Wretch32 and many more.

Techno legend Richie Hawtin takes care of proceedings in the Together arena alongside the likes of Modeselektor, Sub Focus and Andy C, whilst the greatest Sunday clubbing institution on the planet, the mighty We Love..., host an arena at SW4 for the very first time. Sasha headlines their stage with a greatly anticipated V_rtek performance, supported by very special DJ sets from Simian Mobile Disco, Steve Lawler and Ellen Allien. Swedish techno sensation Adam Beyer brings Drumcode to South West London with an exclusive label showcase, featuring a one off performance from Eric Prydz under his Cirez D guise, plus live sets from Slam and Paul Ritch. With many more acts playing across four stages we cannot wait and we’re sure you can’t either. Be sure to get your tickets now if you want to be a part of SW4 2011.

Published on 10 August 2011 by Wayne Feltham